This afternoon I'm really pleased to welcome lovely Emma to the blog, she'll be sharing her wedding planning journey with you all this year as our RMW Real Bride. Emma has been a loyal follower of the RMLtd brand for a long time, so we were absolutely thrilled to hear that she was engaged to Dean. Emma is a girl after our own hearts, she loves weddings, loves to travel and just generally has a really positive outlook on life. These two are a super cute couple and we hope that lots of you will be able to relate to their planning trials and tribulations. Emma will be blogging on Sundays twice a month from today until her summer wedding. But for now, we're chatting about how she and Dean met (a slow burning love) and their romantic (international) proposal story. Right, I'll pass you over to Emma...and do share your proposal stories too, we'd love to hear them!
Hello fellow RMW readers! I am super excited to be an RMW real bride so that I can share the planning journey with you all. I have to confess I’ve been hanging around Rock My Wedding for years now. Not because I’ve been hankering after a proposal for that long, I promise, but because I’ve been wedding obsessed since I first waitressed at a wedding for my Mum’s catering company. I love the pretty, I love the dresses, I love the love. But it’s the super sparkly bling that has wound up on my finger that has led to me appearing ON these pretty pages. First thing first, here’s the love story...

Dean and I have known each other for over 15 years, but our story is a bit of a slow burn. He is friends with my bestie's brother, so we have always moved in similar circles. We had a laugh whenever our paths crossed but weren’t particularly close. Several years later, two of our closest friends got married, I was bridesmaid at the wedding and Dean was best man. We saw each other more frequently, but it wasn’t until 2014 that we started talking regularly. Dean kindly offered advice and motivation for a triathlon I was training for. Dean is the athletic type, regularly taking on crazy challenges. On the flip side, I was challenging myself in memory of a friend purely because she would have found my participation in such an activity utterly hilarious. So I was in need of the advice. The more we chatted, the more we found that we were at a similar stage in life; both in relationships that weren’t working out as we had hoped. Though we became much closer, the light bulb still didn’t quite go on. When I became single Dean was keen to set me up with various people. Perhaps he was testing the ground, but I politely declined - life was hectic with the prospect of moving house and starting a new life after seven years in a relationship. These protestations miraculously disappeared when Dean plucked up the courage to ask me out himself though.

Dean will deny that he is romantic, but given that our dating escapades involved lazy afternoons in Stratford-upon-Avon, prosecco picnics and the London eye, I knew that when a proposal came it would be perfection. We had talked about getting married within a very short time of being together, but I didn’t see the proposal itself coming at all. All of our spare pennies were going on travels (making up for lost time and quickly ticking places off our bucket list). I just didn’t imagine Dean would have anything to spare on a ring. Little did I know that ahead of our road trip to America in August, he had bagged the ring and planned the proposal. It happened in San Francisco, in front of the golden gate bridge on a beautiful strip of (almost) deserted beach. (Luckily the pack of dogs and their doggy walkers, that were making Dean quite tense, wandered off. Eventually). Just as I got up and strode across the beach announcing that we should get on with the rest of the day, a slightly wobbly voice pleaded ‘wait for me, I have a question to ask you.’ And then the penny dropped. Right about when I turned around and Dean was down on one knee with the most beautiful sparkly, square cut, vintage style ring in his paws. The sparkler is exactly what I would have picked for myself, so the boy certainly did good. 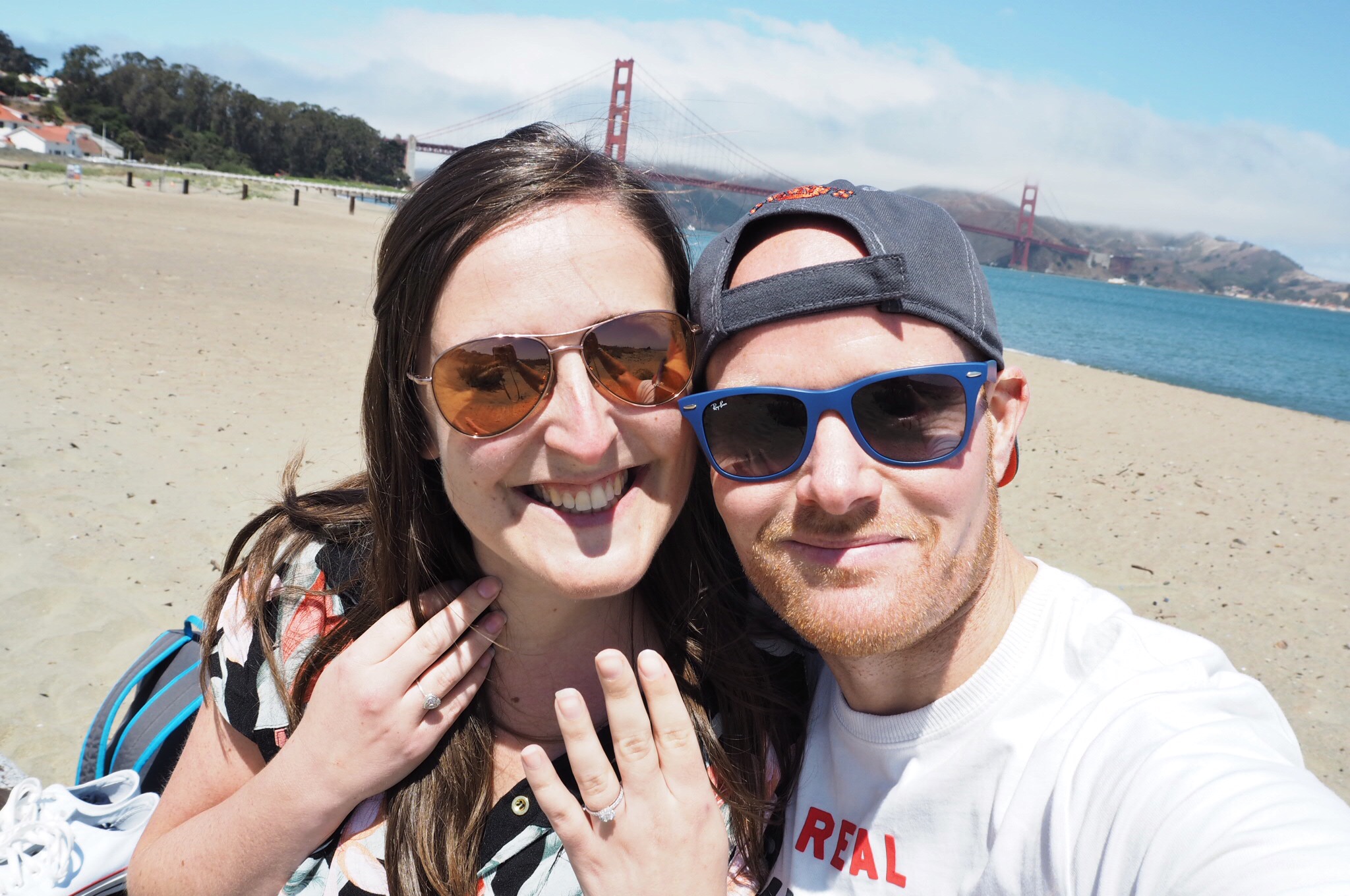 As the proposal took place at the start of the holiday we had two weeks to bask in its glory before we headed home and became emerged in planning. Here’s a quick fire round so that you can get to know us a bit better: I love: chocolate, prosecco, reading, blogging, the beach, anything that sparkles, and pretty dresses. Dean loves: Arsenal, Formula 1, cycling, (actually any kind of sport), photography, beer and cheese. I will be back soon to tell you all about my planning so far, but first I want to hear all about your proposal stories. Pop them in the comment box below, pretty please? Lots of wedding love, Emma {Year of the Yes}