I was sat at my desk tapping my fingers furiously, trying to find the correct vocabulary to describe the images of Rock My Wedding reader Sam and her husband Pete’s chic Autumnal soiree. I do not work well under the influence of frustration ( I have been known to throw the odd tantrum…..) and on a few occasions have had to step away from my screen, take a deep breath and start from the beginning.

You see lovelies, there is something so honest about them, a certain bright clarity that enables you as the viewer to really feel like you were part of the event. And that’s where the missing words lie, they show the truth, the real capture-every-important-moment of your wedding day. Combine this with Sam’s witty, sincere and heart-felt write up and you’ve got the perfect ingredients for something truly beautiful.

With thanks to the lovely Mister Phill for sharing the joy. 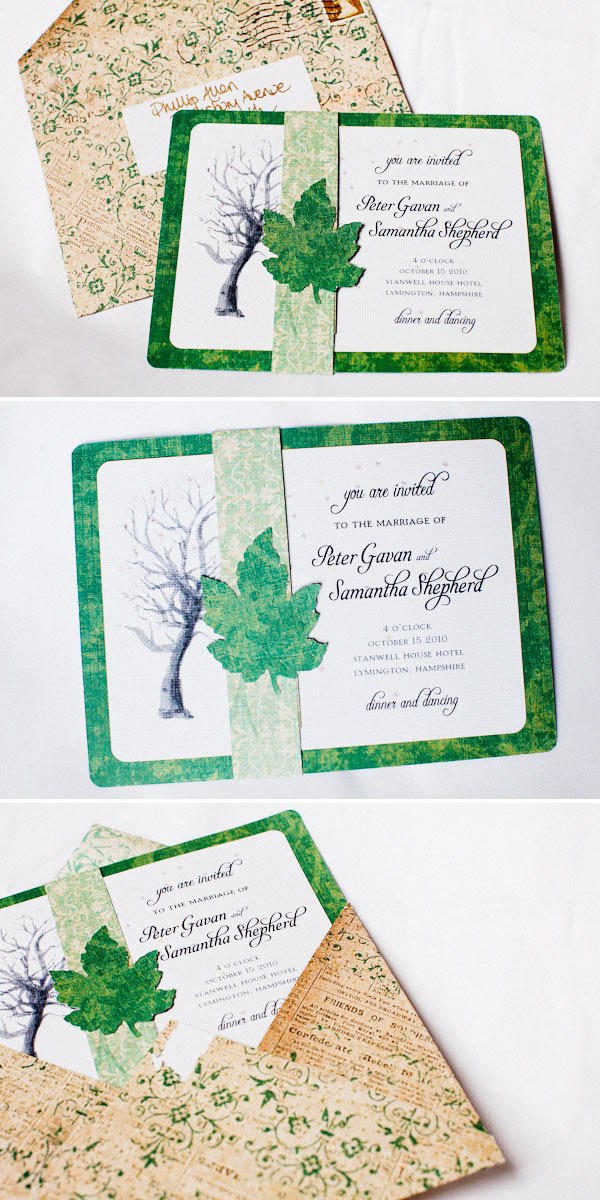 We live in the forest and since we’d picked October for the date, we really wanted everyone to see how beautiful it is in the autumn. I made invites that feature a tree shedding their leaves and leaf-shaped yes and no RSVP stickers. Orginally I’d planned autumn colours and the food was inspired by a vision of a huge harvest feast.

We saw a lot of places we couldn’t afford, a lot of places that felt too grand to be really “us” – but when we went to Stanwell House Hotel in Lymington we knew almost as soon as we walked in. It was the kind of boutiquey hotel we’d stay in and we both felt really comfortable (and since Pete gets VERY nervous about speaking in public, relaxed was what we were aiming for!) 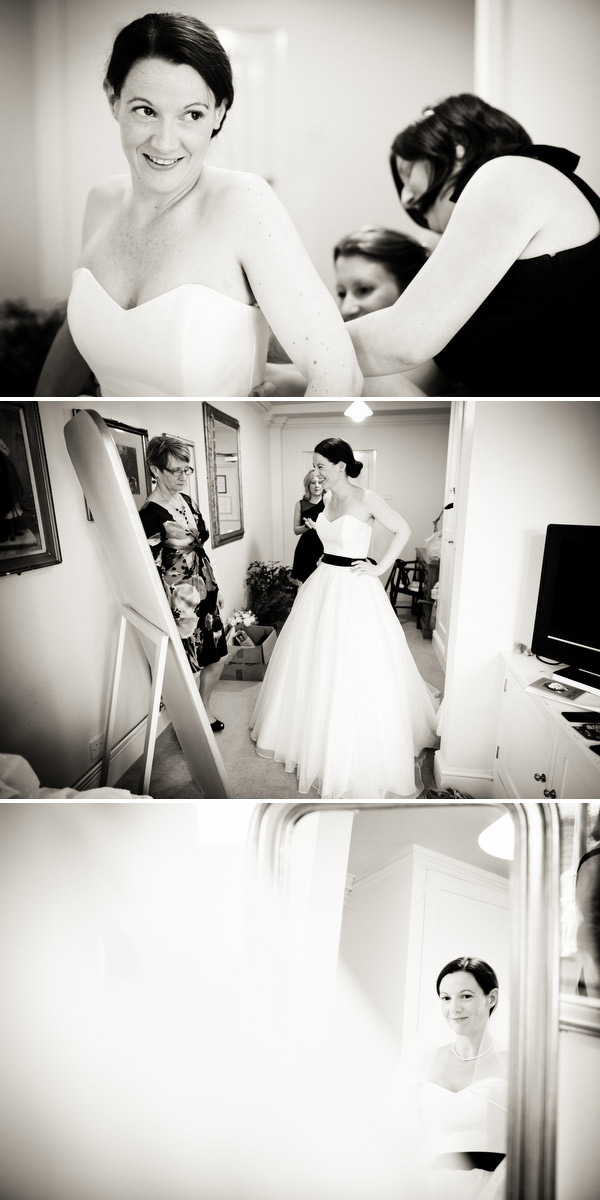 Ah, the dress. I tried on a LOT of dresses, from slinky Sottero and Midgeley numbers to a massive full skirted Ian Stuart and lusted over American designers with tiers of ruffles. I loved them all…. but I had an idea in my head of the dress I wanted, quite Grace Kelly, and I couldn’t find it. Plus, I couldn’t decide whether the big dresses (the ones I loved the second I tried them on) were just a bit too …naff. I actually had decided on a slim A-line number with bronze and gold lace round the bottom until Pete decided he wanted a lilac tie! 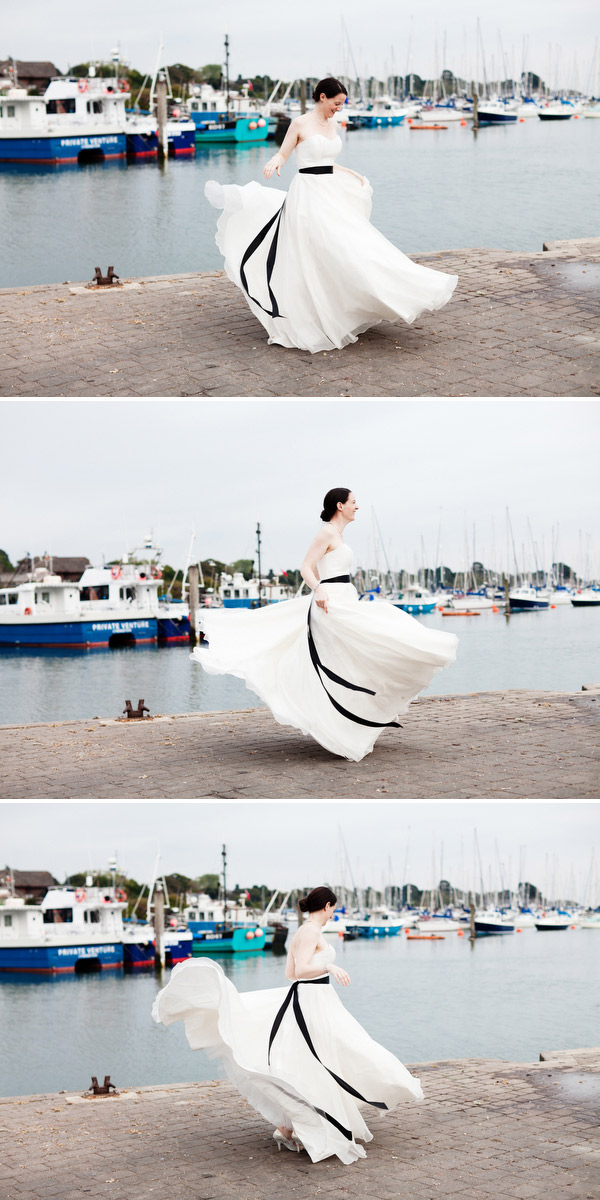 But then I was flicking through a wedding magazine and saw an advert for a Lyn Ashworth dress – quite Audrey Hepburn but with a fabulous ballgown skirt – and thought that’s what I’m looking for. Two minutes on Google later I’d discovered my closest stockist was Evangeline Rose in Godalming, run by Beverley Lister. Beverley makes some gorgeous dresses of her own, but I actually didn’t look at anything except the one I’d come to look at!

A few adjustments, a promenade down the street and several thumbs up from random passersby later and I was sold. I hadn’t actually asked how much (and it was enough over my budget that as soon as she comes back from the cleaners, I’ll be listing her on Undress!) but it after so long of not seeing the dress I had in my mind’s eye I couldn’t have not bought it! She came with a fabulous belt but I decided to wear the black ribbon about ten minutes before I was due at the ceremony! 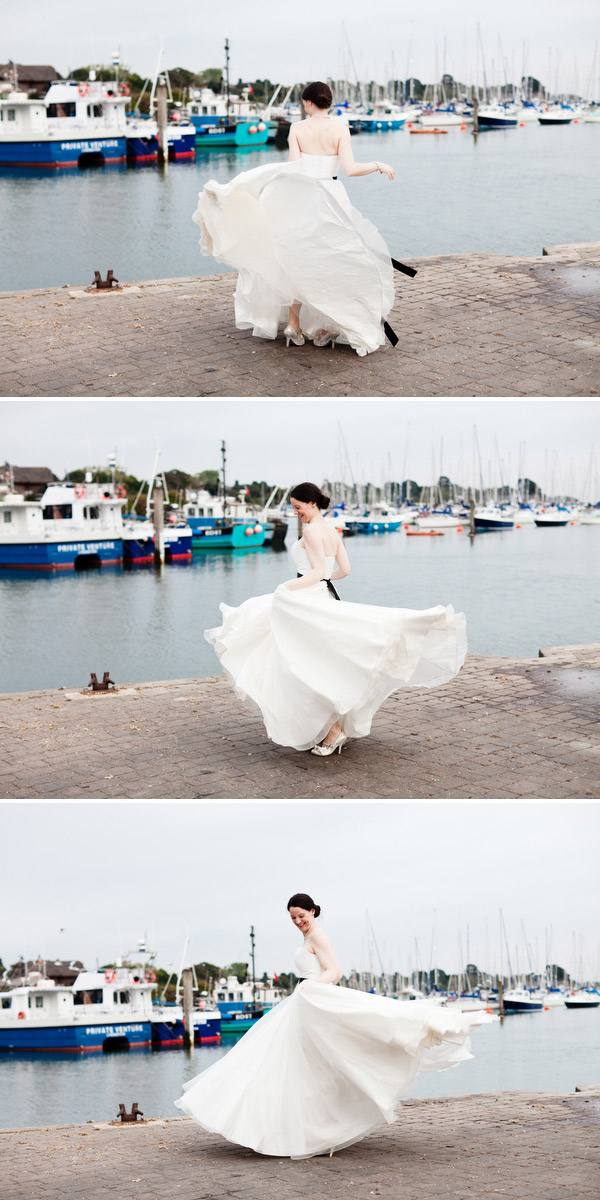 I wore pearls my sister had bought me for her wedding, and a bracelet lent to my by my bridesmaids. I had an awesome veil that Beverley suggested and just put my hair in a bun – although I didn’t decide that until about two days before. To be honest, with lots of the smaller things, I was winging it a bit. People kept saying “what are you doing with this/” and I’d go “dunno. haven’t decided really…” 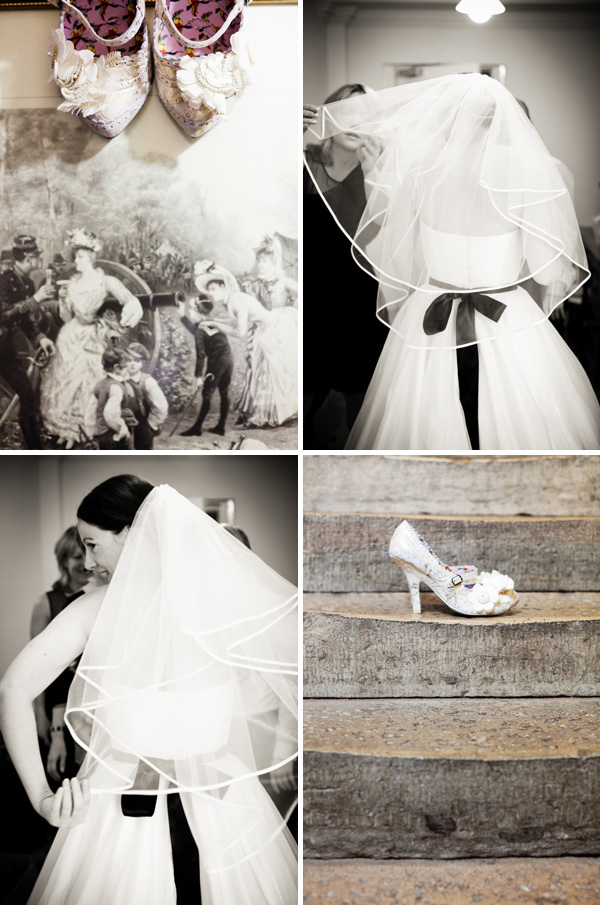 Now shoes is the one area where I really didn’t wing it. I’m well known for skyscraper heels in unusual colours and had money been no object a pair of purple Christian Louboutins would have been mine. However. Just after we got engaged, a full 13 months before the wedding, I saw the Irregular Choice courtesan and fell in love with it. They were bought for me as a present by my brother’s then girlfriend and I love them as much as I did then, even though I’ve seen about twenty other brides wearing them! (I have already worn them twice since the wedding)

Pete wore a grey suit from Reiss. He looked VERY handsome – the waistcoat wasn’t the one that came with the suit because they’d sold out everywhere in Britain (believe me, we looked!) but we found one that matched perfectly in TopShop.

It was really funny, because we’d been joking about Pete (who’s the emotional one) bursting into tears but in the end it was me who was struggling to hold it together.

I think it’s because we’d been so busy with the decorating all day (and I’d been awake since 4.30!) that I hadn’t really thought about the actual wedding part until I was standing in front of the mirror in my wedding dress…. 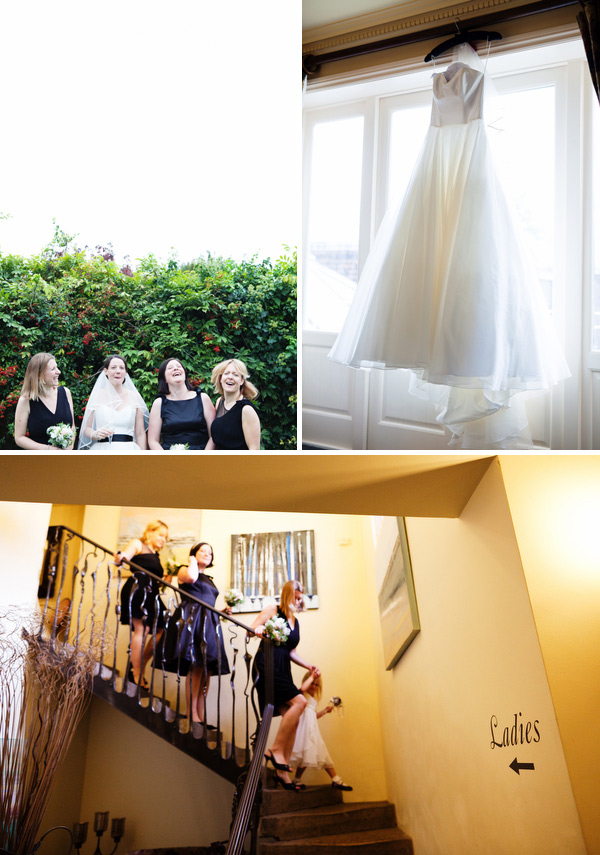 I told my bridesmaids they could wear anything they liked as long as it was roughly kneee length and black! I thought I’d be making things easier but I think actually they’d have secretly preferred me to tell them what I wanted!

We ended up with one John Lewis, one Warehouse, and one Coast and they all looked fabulous. Because we wanted everything to be less formal and more relaxed, not “wedding-y” we didn’t have groomsmen as such, but we asked all the male family members, plus the best man, to wear a grey suit, to match Pete, and we bought ties in various shades of purple.

Pete’s niece and nephew were ringbearer and flower girls – we bought Rhys a grey waistcoat and purple bow tie and Anna a dress with a pearl beaded waistband. Pete’s mum made a bouquet of crochet flowers in purple and cream for Anna to carry and a lovely ring pillow for Rhys to carry. 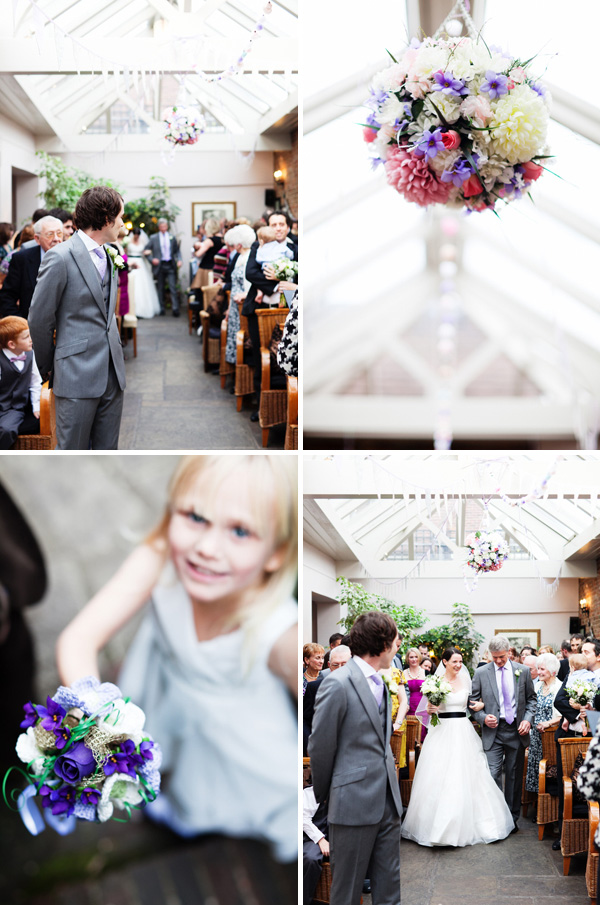 I had a nightmare with flowers. Because we paid for half the wedding ourselves and were determined not to get into any debt to pay for it (and then I spent all that money on the dress…) we didn’t have a lot of money for flowers. About £300 max in fact. Some florists I didn’t even ask. Some said they’d work with all budgets and then just completely ignored my emails when I told them exactly what I had to spend.

Now I know that when you book a florist you’re not just paying for flowers, you’re paying for expertise, not to mention the creating of the arrangements and getting them to the venue, but for us it just wasn’t an option. Like with the dress, I knew what I wanted – lots of small vases and jars with greenery and flowers. Plus my sister, who spent a lot of flowers at her wedding, said if she could change one thing, it would be that, because hardly anyone had noticed them.

I had a vision in my head that it would look like we’d gone out into the forest and picked them, then all fallen asleep like they do in Sleeping Beauty and woken up several weeks later when everything was a bit overgrown (I know, totally daft). 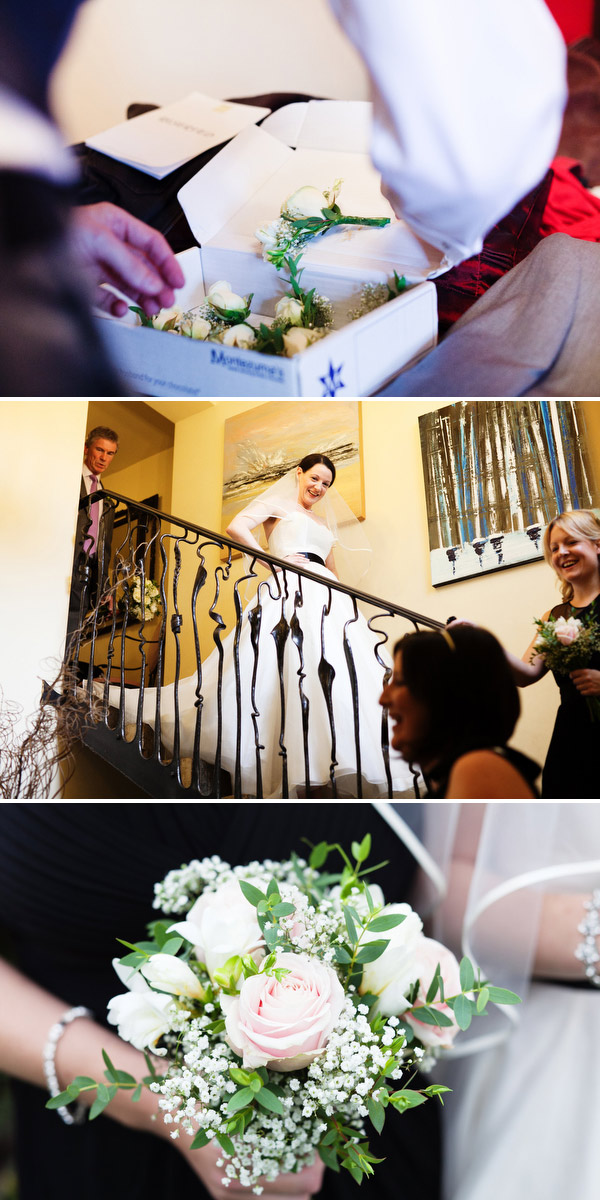 I also had some birdcages that I wanted to fill with flowers. I toyed with the idea of doing them myself and buying a boquet from a nearby florist but Pete was worried it would be too much to do on the day… anyway, long story short, I did a trial run for my dad’s 60th and thought, actually, this would be doable.

Then I found a fab wholesaler called Nursery Fresh who didn’t flinch at my budget AND who had a florist who’d make bouquets for me. So I went to see them, clutching the a table’s-worth of vases (we had seven per table – one vintage tea cup, one St Peter’s beer bottle, jam jars, a jug for the centre and little bottles/glasses that I found in charity shops), they suggested types of flowers and eucalyptus, and florist Jan even agreed to do my birdcages as well as bouquets. And all of it for £250!

We used “cheap” flowers – gypsophilia, carnations and freesias with some avalanche roses – which meant less flexibility about colours (I was aiming for a vintagey palette but it ended up pinker than I’d imagined) but I was so pleased with how they came out. 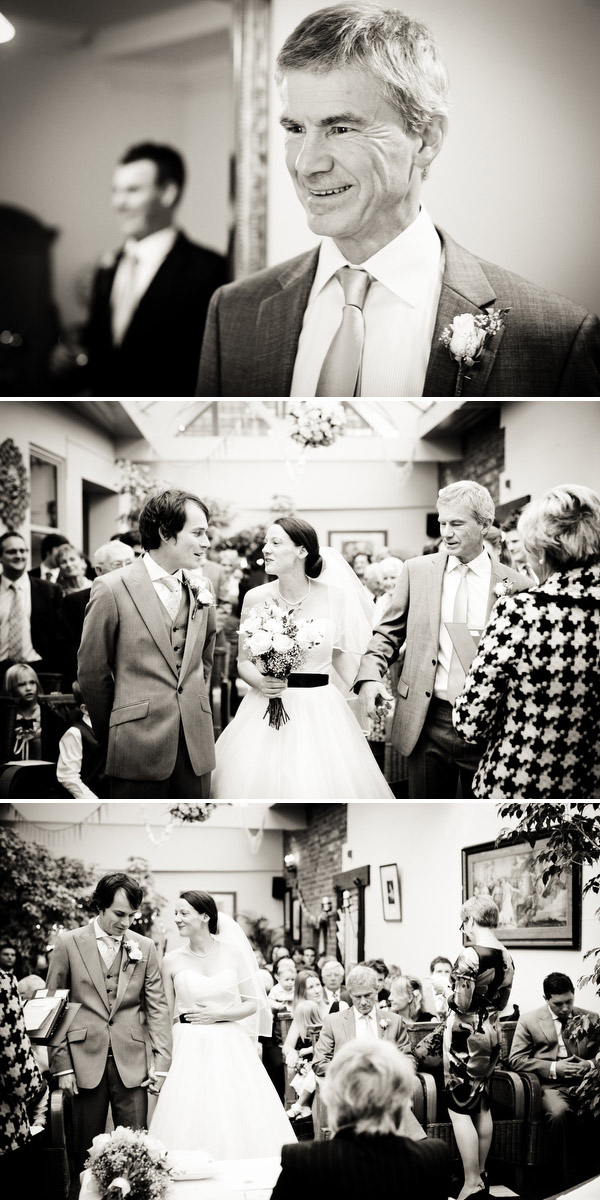 Hmmmm Make-up. Like I said, I winged it. A lot. I couldn’t bring myself to shell out a hundred quid to have my hair put in a bun, I booked a wash and blow dry at a salon near the hotel and bought a nifty gadget for bun making which my sister helped me do. I did go to a make-up trial at MAC but the guy who did the trial was wearing more make-up than I’ve ever worn in my life. He did a proper glam job on my eyes but I really didn’t feel like me.

So I went back through Rock My Wedding for the post Charlotte did on the “face that suits everyone” and adapated it a bit to fit me. We were still decorating the room at 1.30pm though and the wedding was at 4pm so I didn’t have time to worry about it! 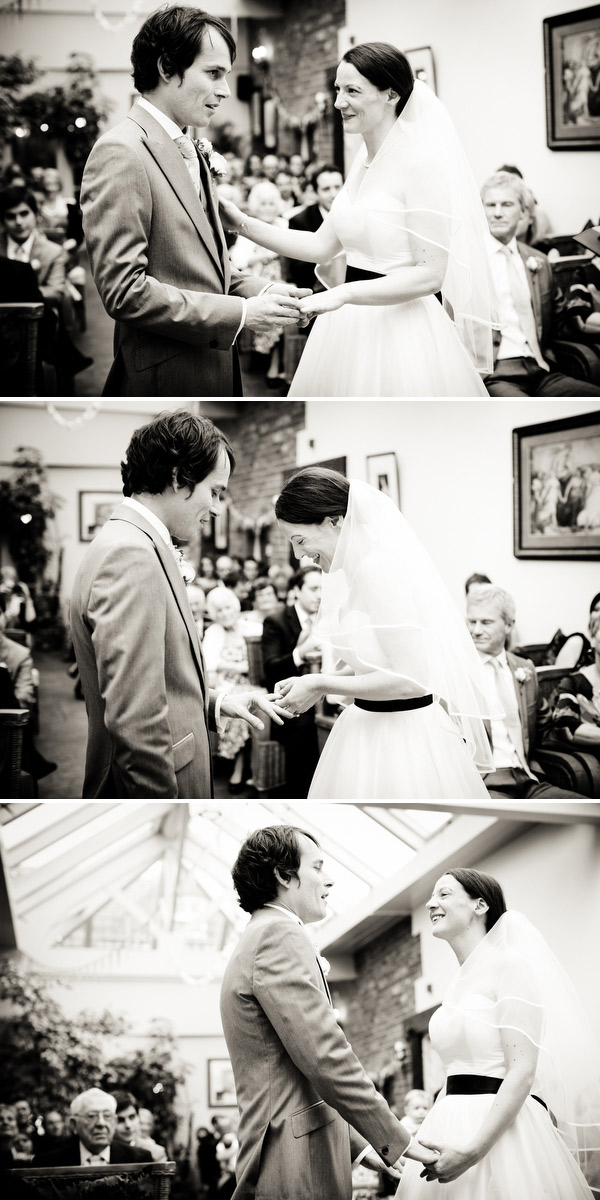 I really wanted a pomander, but you guessed it, no money, so I bought a cheapo hanging basket and a ball of oasis and some fake flowers from Wilkos and made my own to hang from the centre of the ceremony room. The bunting and garlands all came out from this central point to the corners of the room. When we hung it up the night before one of the staff at Stanwell didn’t believe it wasn’t real flower (yay!). PS if anyone wants it, let me know I have NO idea what I’m going to do with it now! 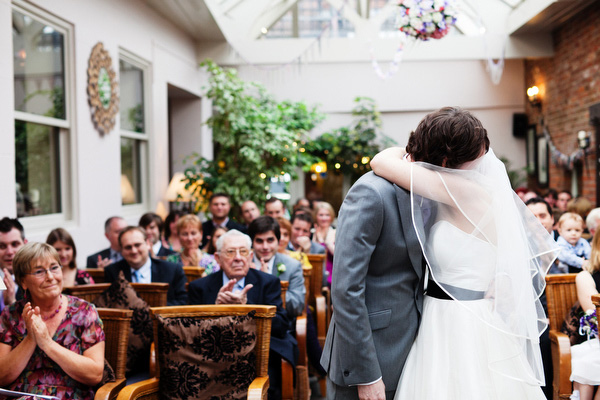 I know I know, so much clever D.I.Y, you gorgeous lot sure are a talented bunch 😉

And how much do you now want to go and swish around in an Audrey Hepburn inspired ballgown?

38 thoughts on “The Beautiful Truth……part 1”