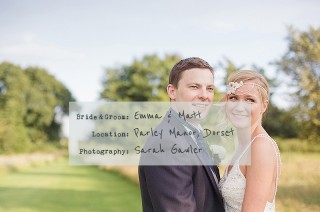 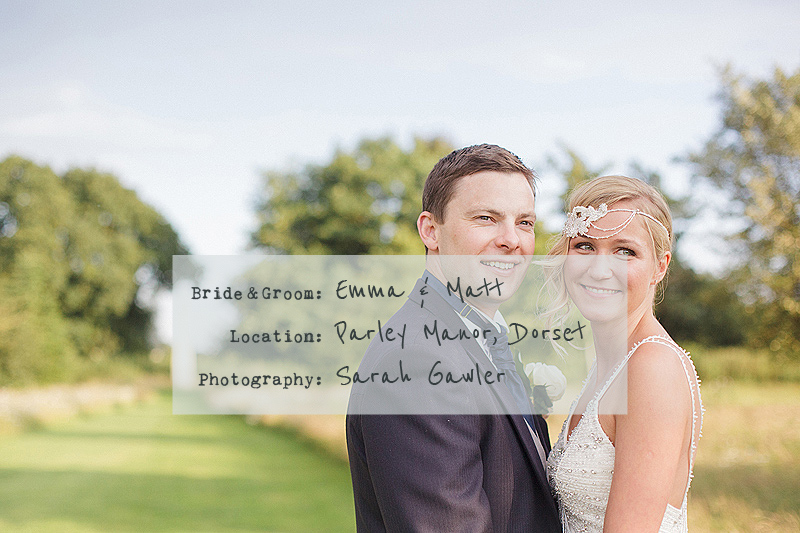  Emma describes her big day as “absolutely magical” and I’d have to agree, there is something really quite ethereal about the combination of 1920’s influences, sequins and sunshine – a very stylish fairytale if you will.

You may recognise Emma’s dress – the Gatsby by Ritva Westenius as we used the blush version in our recent “En pointe” editorial, the back detail is just to die for and works perfectly with the bespoke headpiece.

And the skis used to create a table plan?! genius.

There are lots of useful details on menu choices and general styling so make sure you have yourselves a cup of tea, a biscuit (or two) and a read lovelies. 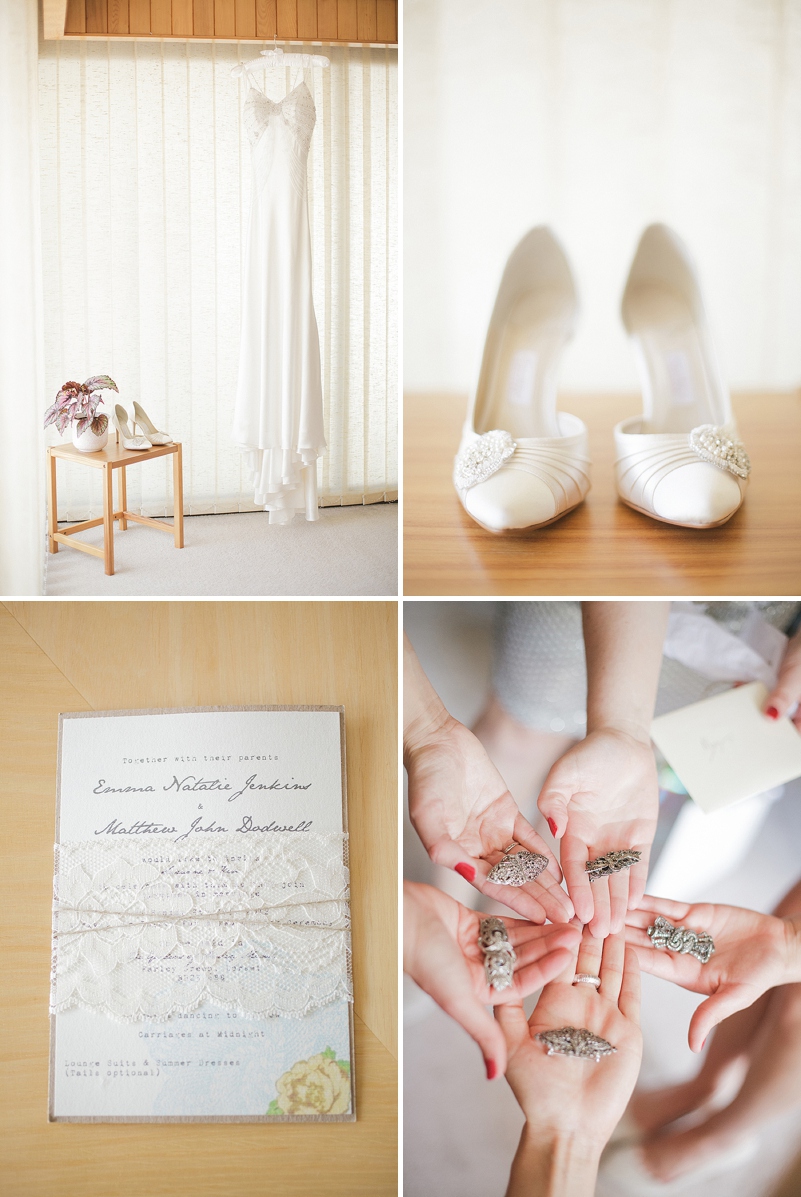 Our wedding venue was Parley Manor in Dorset. We wanted it to be relatively close to Bournemouth, so that my elderly grandparents would be able to attend. Bournemouth is where I grew up and where all my family are from. We looked at a number of venues over a month or so. Parley Manor was actually the 2nd place we saw, and we loved it straight away. But we carried on looking almost just because we felt we should see other places to rule them out so that we could be confident that Parley really was the place for us!

We particularly loved the fantastic gardens at Parley, the relaxed atmosphere and the outside aspect to the ceremony room.

I wanted to go for a 20‘s inspired look in keeping with my dress. My makeup artist was Annabel Hornsby. I actually found her through RMW as another bride from Bournemouth had written about how she had done an incredible job of natural looking make-up for her wedding, which was exactly what I wanted. Annabel did my hair as well, and i couldn’t recommend her more highly for both hair and make-up. On the day she brought an assistant with her to help with the bridesmaids hair and make-up.

I had red nails on the day as that is my favourite nail colour!For perfume I chose Emporio Armani, ‘She’ as it’s the perfume I always wear. 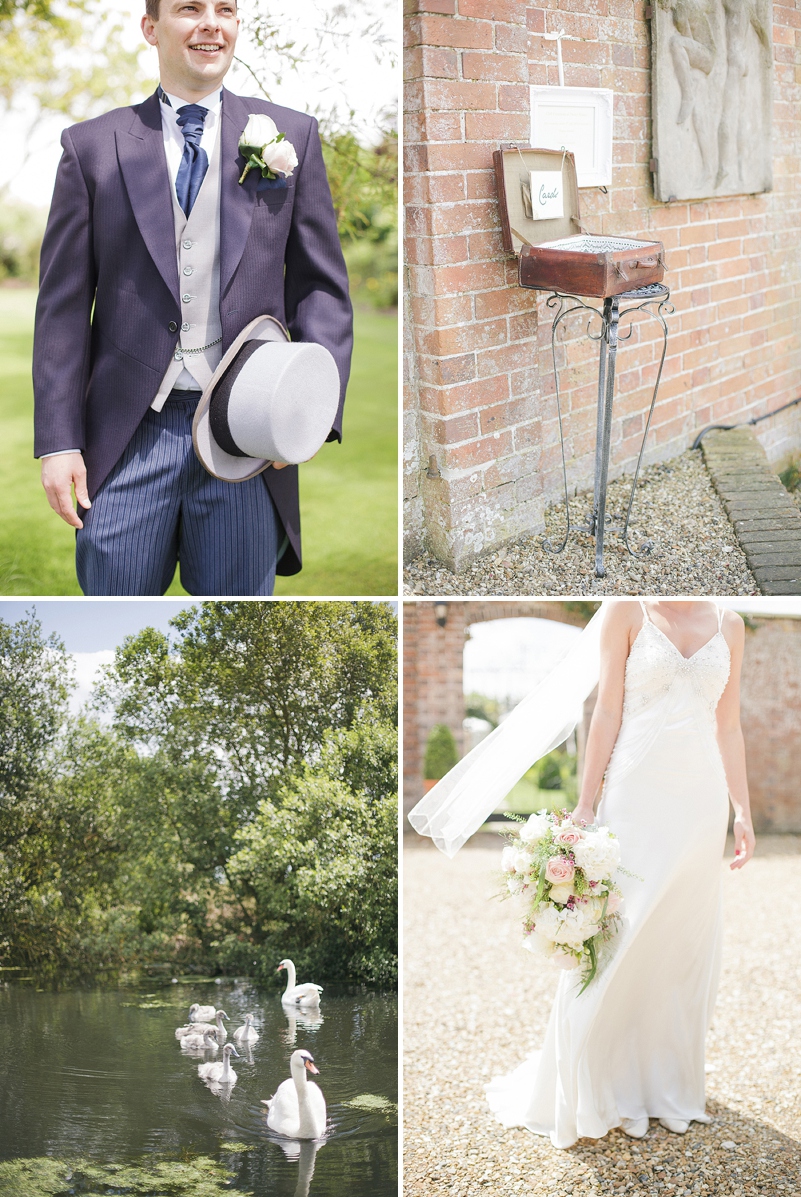 The designer was Ritva Westenius and the dress was called ‘Gatsby’. I bought it from The Beautiful Bridal Boutique in Bournemouth.

It was much more ‘me’ than the other more traditional lace dresses I had tried on. I always thought I wanted a silk slim fitted dress and as it was made from silk it just hung so beautifully. To be honest I think it was actually only after I had ordered it that I realised just how much I loved it!

My shoes were from Rainbow Club’s couture collection. I bought them from John Lewis. I also wore a small pair of diamond stud earrings that were an 18th Birthday present from my Mum. For the ceremony I wore a simple one layer fingertip length veil with a curved edge.

A lady called Sofia, who I met at The Vintage Wedding Fair in London, custom made for me the most beautiful 1920s head piece. She was incredibly talented and lovely too. From my very vague description of what I wanted, after a few meetings where she started to make a couple of different things for me to get a better idea of what I wanted, she made my head piece which exceeded all of my expectations. I absolutely loved it, and I got more compliments on the day over that than about my dress!!

I think that the headpiece and how it finished off the outfit was one of my favourite things about the whole day!!

Matt wore a navy blue Tail suit with grey waistcoat, and a navy blue ruche & hanky from Jo Mclaren Menswear in Teddington. He had his suit made, as he was between sizes of the hire suits. We hired the other Ushers suits from the same shop, as well as the top hats. His shoes were from Paul Smith. I also bought him a vintage Pocket Watch from Etsy as a wedding present, which looked great with his waistcoat.

The bridesmaids dresses were from Monsoon and their shoes were from Zara. I also bought as gifts for them five different vintage 1920s/30s brooches from Kempton Antiques Market. They pinned them to the lace wrapped around the stems of their bouquets.

Parkwood Florists supplied the bouquets and button holes. Julie Nicholls set up the table centre-pieces and supplied the flowers to go in all of the decanters and glasses (to match along the same lines with the flowers in the bouquets), as well as tying single flowers on the back row of the chairs in the ceremony room, and the ones next to the aisle. She also supplied a small basket of pale pink rose petals to be thrown as confetti when we walked back down the aisle and put some flowers on/around the cheese cake and in decanters/glasses on the table with the cheese cake and also on the gift table.

We had a Civil Ceremony. It was in a beautiful ‘almost outdoors’ marquee within the gardens of the venue. The sun was shining which was such a surprise as it had been forecast for rain. Walking down the aisle and seeing Matt was definitely one of my most memorable parts of the day and it was was so incredibly special and magical for both of us to have all of our friends and family together to witness our vows.

We had 2 readings during the ceremony: Notes on Marriage by Charles Darwin Tin Wedding Whistle by Ogden Nash

 We didn’t have a colour scheme as such, I just wanted everything to look simple and clean. The bridesmaid’s dresses were a gold colour which picked up the light beautifully. We wanted to keep the flowers white and cream, with lots of greenery, and with just a splash of pink.

We didn’t particularly have a theme to start with, but it evolved into something that was Vintage 1920’s, with a lot of cut glass. But we wanted to keep things relatively simple and relaxed. We both love skiing, and that crept into the day too.
We love cheese and port, so right at the beginning of planning the wedding I thought it’d be nice to get some cut glass decanters to serve different ports in, so all the guests could have a glass along with the cheese board evening buffet. This somewhat evolved and became quite a theme for the day. 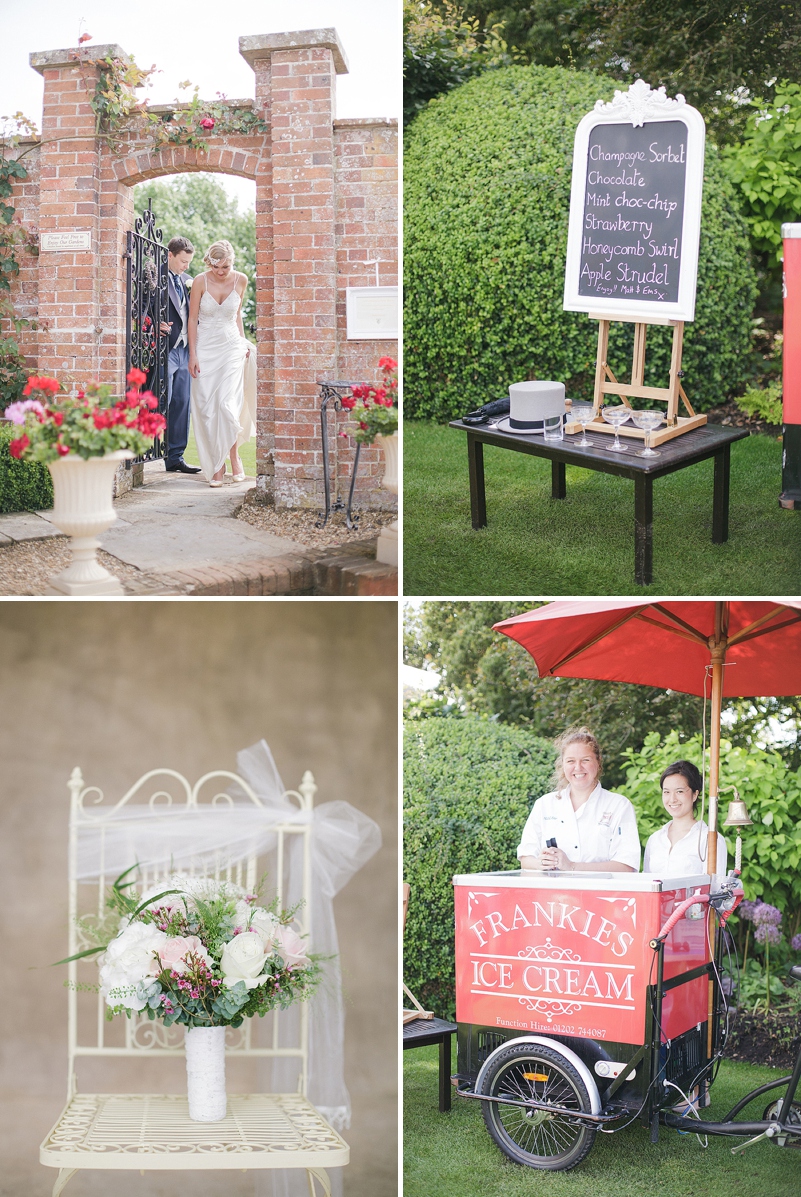 For the reception we had a locally based Guitar Player who played whilst the guests arrived, during the signing of the register and then for the Drinks Reception. He was excellent.

For the evening we booked a great band called The Dukes of Havoc.We had difficulty finding a good band that played the kind of music we were after. After a great deal of searching we found the Dukes of Havoc. They happened to be playing in a pub nearby to us in London the following week, so we went down to watch, then booked them the very next day!

Our first dance was to Footloose by the Countdown Singers. We had wanted to do it to that song for ages as it was a bit more fun than a slow 1st dance. We are somewhat fans of very cheesy music and whenever that song comes on we always get up and dance to it! We actually did a series of lessons at Stardust Ballrooms in Putney, and did a little routine for it.

Merlins Caters came with the venue, but were absolutely excellent. We had an amazing Wedding BBQ Menu with a huge choice of peppered minute steak, handmade Dorset port & leak sausages, salmon in lime & ginger marinade, Cajun spiced chicken breast and vegetable kebabs, as well as a vast array of salad & side dishes and breads. Tables went up one at a time to help themselves from the BBQs and salads that were outside in the gardens. Plates were piled high!

Dessert was a choice of Eton Mess, lemon torte or raspberry and dark chocolate cheesecake. The evening food was our cheese cake that was cut up and served with Dorset farmhouse pâté, honey glazed gammon and accompanying homemade breads, pickles and chutneys.

The Wedding Cheese cake Stack was provided by Merlins Caterers. It had 6 different types of cheese (even one Heart shaped one!) which were all delicious. We served the Cheese cake as part of the evening buffet, along with 4 different types of Port served in our decanters. We found the little Mice Cake Toppers on Etsy, they were even made to look like my dress and Matt’s tails.

I found the invitations and stationery I liked from a lady on Etsy in the US. I liked the whole range, but the invites were my favourite!

I wanted something with a vintage feel to it, but also simple, and not too fussy. This stationary range ticked all the boxes. Anna was amazing to work with too as she custom made me lots of extra pieces such as tags to label the port and cheese and also the table plan lists. She also emailed me some extra table plans the day before the wedding after we had some gusts drop out.

We bought a pair of vintage wooden skis from Ebay. Matt then constructed a stand and we used them as the Table Plan which looked amazing. We hung the seating plans from twine between the skis. Later in the evening we took them off the stand and laid them out for people to sign and leave messages instead of a guest book.

We have since put them up on the wall at home. 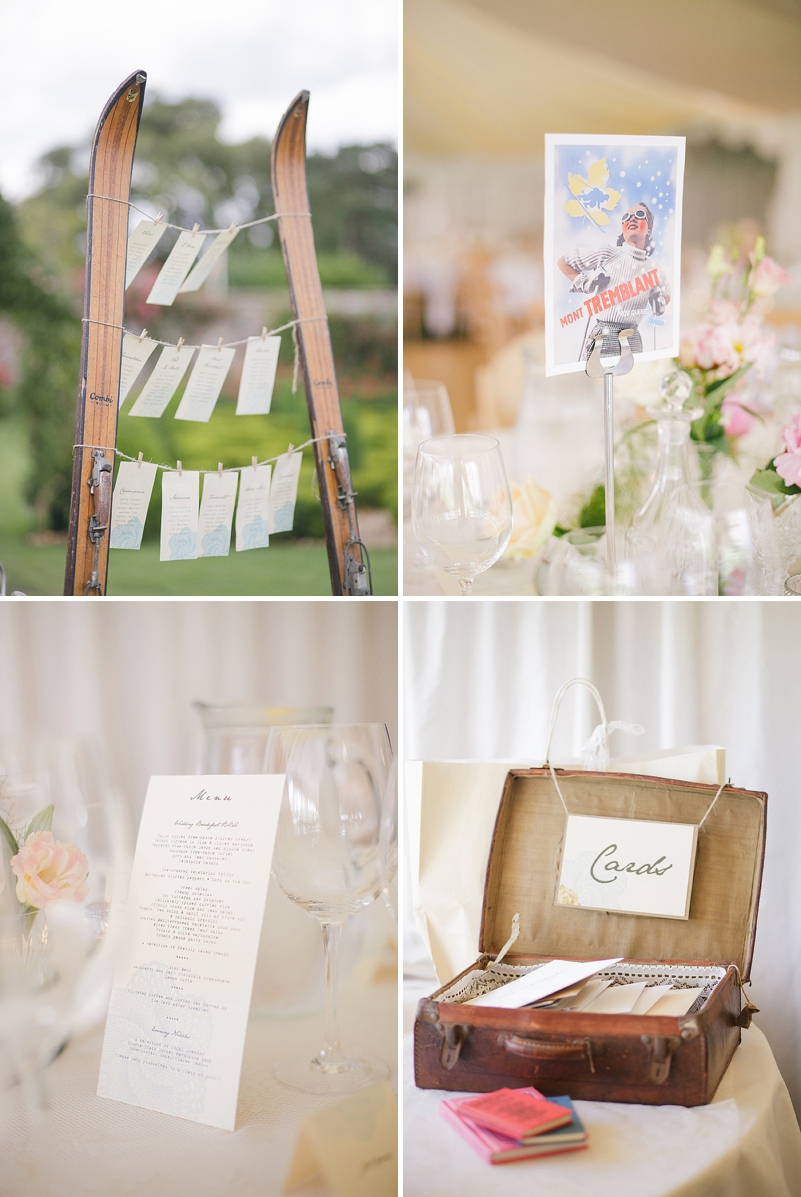 Some money saving ideas – I found buying things using Etsy which is US based to be much more cost effective than buying things from the UK! I bought the mice, Matt’s pocket watch and all of our stationary through suppliers on there. Whenever we had friends going out to the US for holidays or work we asked them to bring the packages back for us to save on the delivery costs to the UK.

Also, the bridesmaids dresses were an amazing bargain in the January sales, although finding 5 in the right sizes took some doing and a lot of phone calls to Monsoons all over the country!

I know it sounds cheesy, but I honestly loved absolutely everything, from the getting ready at home with my bridesmaids and Mum, to seeing Matt and the ceremony itself, the drinks reception, speeches and dancing. It was just lovely having all of our friends and family together, and to have the day feel incredibly special and magical for both of us. Not to mention that the sun was shining which we weren’t expecting!

We were both really glad that we decided to have a wedding videographer. Initially we weren’t considering it due to it being another cost, but it’s such a fantastic memory of the day, that we would recommend it to everyone. It enables you to remember all the little moments that you had forgotten about, as well as capturing lots of new memories that you aren’t aware of on the day. We especially love the 5 minute highlights clip…

We used James Bishop from One Take Media.

And what a bouquet – I think it would be perfectly acceptable for me to have something similar just as an accessory, much like a handbag.