You may remember the uber photogenic Polly and Ralph from their colourful and urban skateboard chic engagement shoot that we featured last year.

It will come as no surprise to you all that the couple kept to a bright and sunny palette for their Big Day too, however, the gritty pre-marriage landscape was exchanged for a distinctly more rustic aesthetic. And my, wasn’t it pretty lovelies, delicious and summery with a relaxed rural garden vibe.

And I can’t imagine a dress that would suit Polly better, a dream in princess frothy tulle…. not to mention the maids, those ladies were working the royal Issa-esque frocks well before Madam Middleton even got engaged.

With thanks to Christian and Erica from Christian Ward Photography for submitting the eye candy. 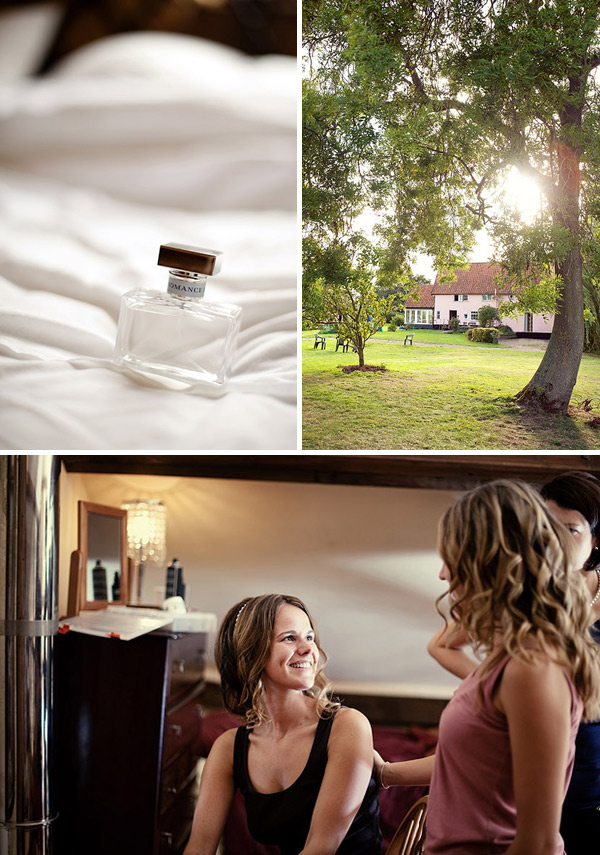 The venue for the reception meant a great deal to us both, firstly because it is Ralph’s home, secondly we spent our first valentines day there and thirdly because it is where Ralph proposed! We loved that it is so rural and not overly neat or prissy. Ralph’s parents worked so hard to make the garden look amazing and Ralph’s mum made hundreds of metres of bunting in our wedding colours of purple, green and yellow! 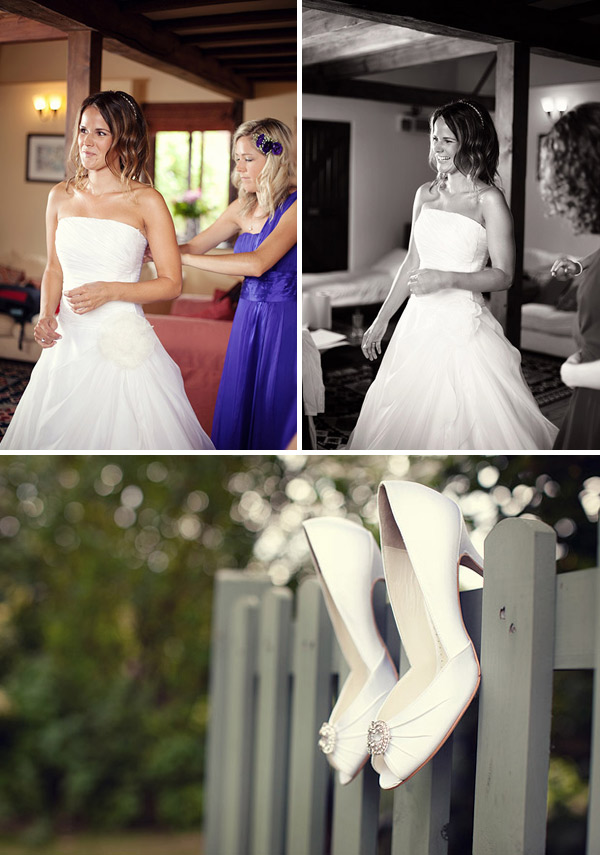 I must have been in a decisive mood at Teokath because I also brought my shoes from there which were Benjamin Adams. They had a medium heel and were so comfortable I wore them all night.

They had to be died white to match the colour of my dress and had a diamanté decoration on the toe. 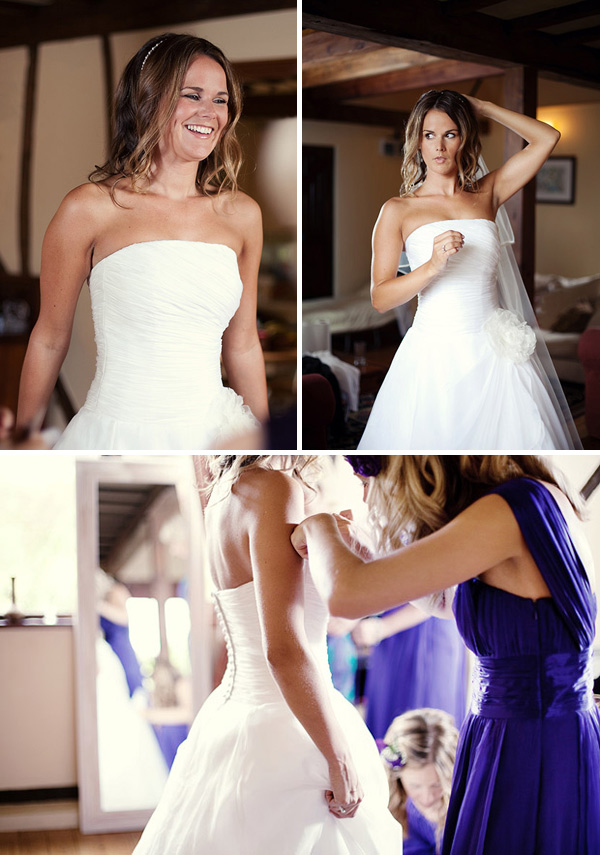 My dress was from Teokath in Wimbledon and was Gilda by Alan Hannah. I changed the dress slightly – it came with a diamante brooch on the hip which I didn’t like so I had that removed and chose a silk flower to be sewn on instead. I found it really hard to choose my dress – I had a really clear idea about what I wanted which was something kind of grecian – like lots of the Jenny Packham dresses. But then I started trying on bigger skirts and I think my inner princess came out! To be honest I was scared by dress was too big until I walked down the aisle! I even had nightmares the week before my dress would knock all of the pew ends off!

On the day and looking back I could not imagine myself in anything different and I’m so glad I let the princess side of me win! 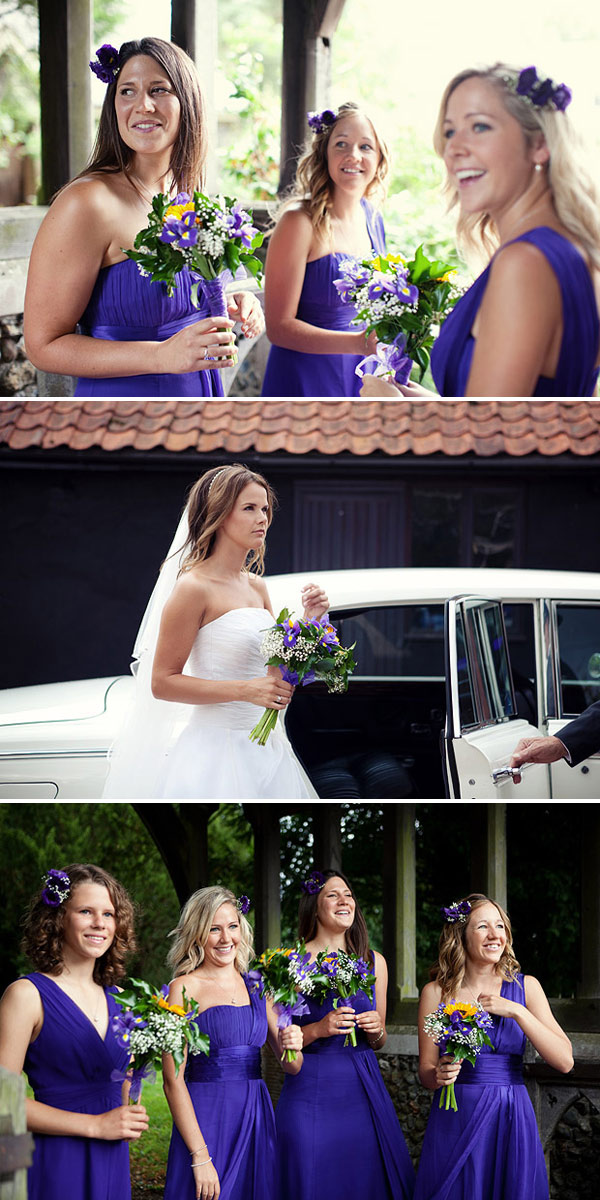 I had a really long veil which was also from Teokath. I loved it! It was sooo windy on the day of our wedding that the veil created some great pics – even if I did feel like I was taking off! I wore some gold, pearl, flower stud earrings that belonged to my Gran. She passed away a couple of years ago so it was so nice to be able to remember her on the day by wearing some of her jewellery as my something old.

My bridesmaids gave me a silver ring with a blue stone in which was my something blue and I also wore a simple gold and pearl hair band which I brought online. 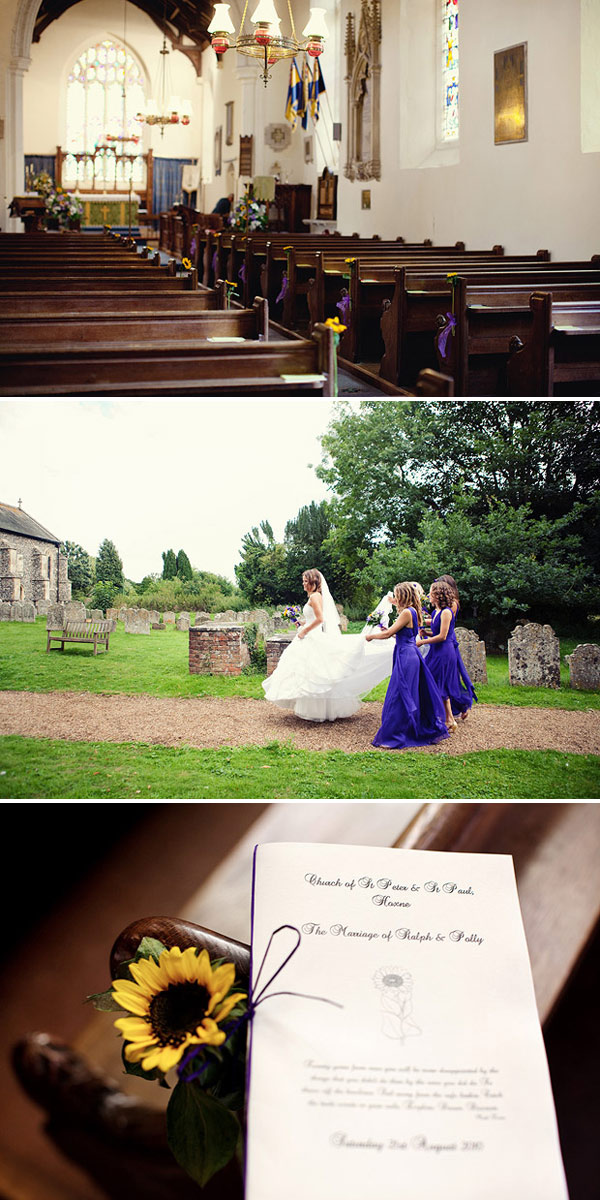 I knew exactly what kind of dresses I wanted for the older three bridesmaids – something purple and grecian – and on our first shopping trip for the dresses we walked into Monsoon and there they were! They all tried them on and loved them! For my god daughter – the younger bridesmaid I wanted to get her a dress she would get a lot of use out of so I took one of the long dresses and matched it to a shorter purple dress from Coast. They were exactly the same colour!

For their shoes we had to look around for something not too high as three of the girls don’t like high heels. We ended up buying some cute gold sandals from office with just a small heel. On the day the taller one actually looked better in flip flops though so ended up wearing them instead!

The Groomsman hired their tails and waistcoats from Moss Bros and wore purple ties to match the bridesmaids. 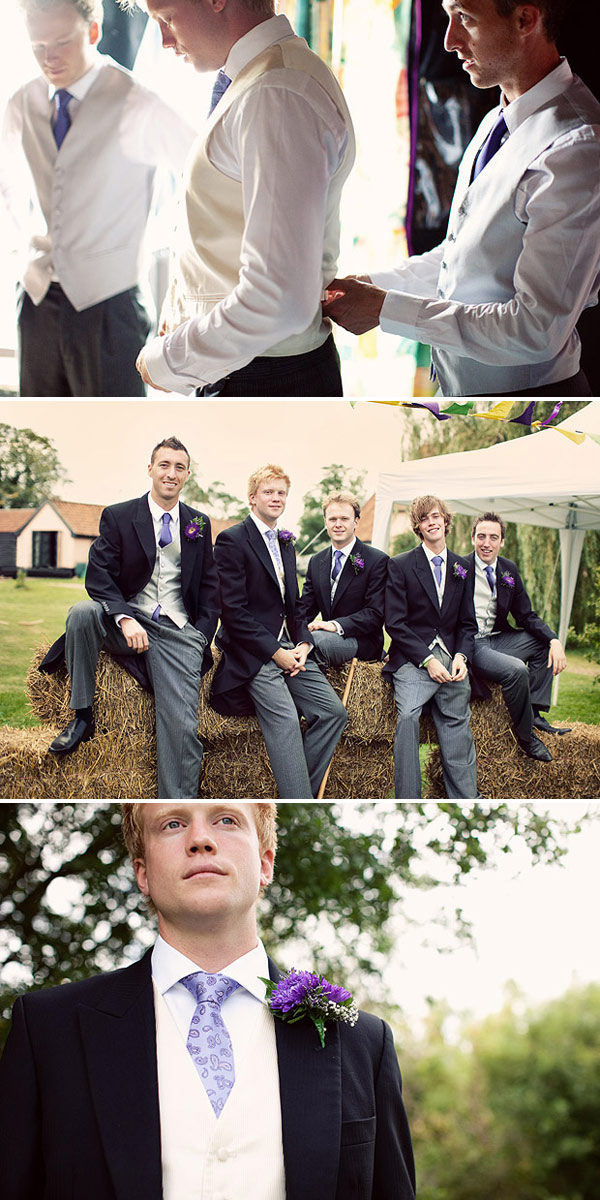 A Call For Beauty

We live in London but got married in a tiny hamlet in the middle of Suffolk so I found it hard to find a hairdresser I liked near by. My local hair dresser in London was really helpful and tried various styles with me and eventually I found one I liked. I then found the brilliant Jenny from Beauty Call online.

I had a trial in Suffolk and told her what my local hairdresser and I had decided on. She was then able to recreate this for me. I wanted waves but I have quite thin hair so GHD waves end up making me look like I have four curls! Instead Jenny cliped by hair into rolls then let it down to create loose, natural waves – just what I wanted! For make up I had a trial at Bobby Brown in Harrods but did not like the amount of make up they caked on my face. I therefore decided to buy all of their products they used and just do it myself. On the day I actually ended up doing my own make up and my four bridesmaids! 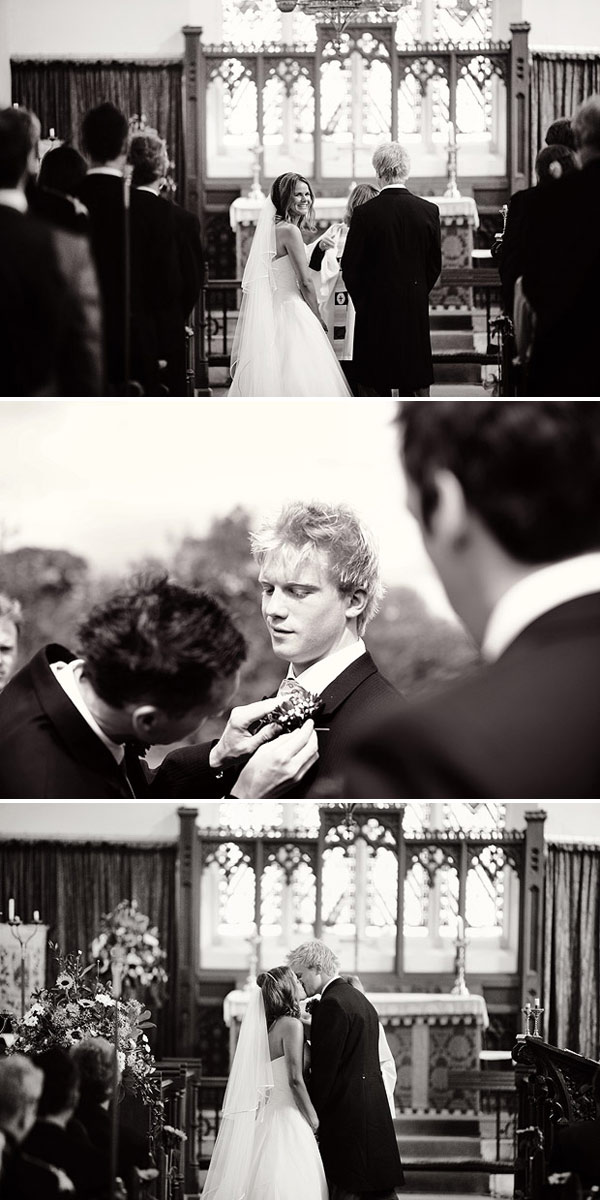 My husband did quite a lot of research into buying a suit then decided it was not worth the extra cost so all the suits were hired from Moss Bros.

He wore a light purple paisley tie so that he stood out from the groomsmen. 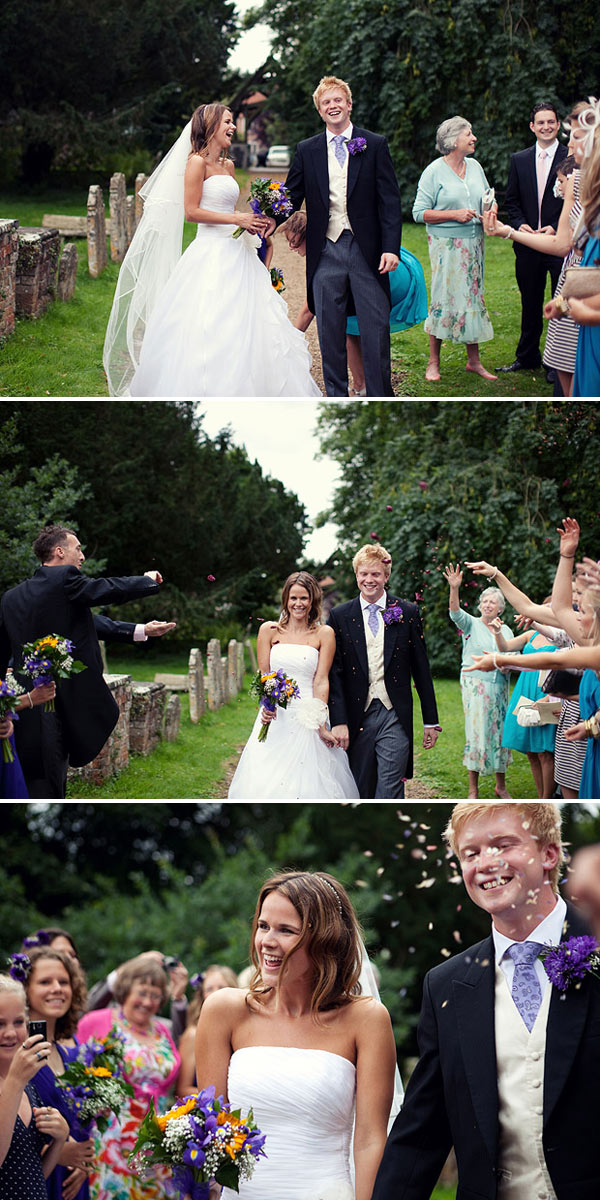 My Best Friend wore Alan Hannah for her W-day and I will certainly say this, the dresses always fit so beautifully, the perfect princess silhouette.