When I opened a few sneaky preview pics from the Grace & Gable winter inspiration shoot and started talking Charlotte through the images, it quickly became apparent that she wasn’t listening to a word I was saying…

Charlotte: Is that Bridesmaid wearing a woolly knit?… I die.

I’m fairly confident that this meant she liked the shoot. And this was before I’d revealed the trees, the tables, the taxidermy… in fact all the little details that makes for a truly inspirational piece.

It would be fair to say that not much work got done that morning at RMW HQ as we poured over the winter pretty before us.

Now it is the turn of you lucky, lucky people. Grab a mug of mulled wine and a hot mince pie in preparation for a tour of the forest.

Lauren from Grace & Gable will be your guide.

It Started With The Forest…..

The decision to direct the shoot came about whilst walking on a friend’s private land in the Wyre Forest. I’d always wanted to organise and style a bridal photo shoot but I hadn’t quite found the right venue or location to fit the bill. Five minutes of walking within the forest however and idea after idea came unbidden to me – visions of a bride and groom trailing through the shoulder-high ferns looking wistfully at one another, bridesmaids in woolly Christmas jumpers drinking festive cocktails and garlands of fairylights festooning the trees. From then on I was hooked and it was just a question of not if but when this shoot was going to happen.

Once the forest location had been confirmed then the choice of photographer was a no-brainer. I’d come across the work of Ann-Kathrin Koch at a recent bridal fair – The Designer Vintage Wedding Fair – and was blown away by both the quality and the creativity of her work. Her portraits are a particular favourite of mine as she is able to convey such a delicate handling of detail whilst still pulling an extremely evocative punch. One of her photo series includes several images of forests and trees and I loved the solitariness that these photos conveyed so I was desperate for her to photograph the shoot. When she responded that she’d love to get involved I will admit that I high fived the air and did a little jig. Ann and her partner Marco were amazing on the shoot, producing some fantastic images in some challenging conditions all whilst continuing to engage with all of the other suppliers and keeping everyone’s spirits high.

I believe strongly in working in harmony with a venue or a location to bring out its best attributes and make it work to your advantage. You could say that the forest determined the theme of the shoot to some extent being mostly fir. With this in mind and given that it was getting very close to Christmas I was keen to create a Christmas themed shoot that could offer inspiration to brides having a winter wedding.

It was very important to me that each of the suppliers had the freedom to create their own ideas for the shoot. From experience, people work best when they are not constrained by too many guidelines and conditions. Instead, the indispensable Pinterest was used to create a mood board that was then sent to each of the suppliers to give them some inspiration with buzz words of ethereal, glamour, glitz, vintage and Christmas.

I also approached the girls – Nina and Sonia – at Invitation Only to ask them if they would be interested in collaborating with me on the shoot. These girls are fantastic stylists with a copious amount of experience under their belts and I knew that their help would be invaluable on the shoot.

Having relayed all my ideas to the Invitation Only girls it was clear that when we started getting into the details a single table set-up and a static scene wouldn’t be enough. Instead the shoot would follow a series of scenes that created a story for the entire shoot, including an aisle set-up, a cake table, a fireplace scene and a fun panorama that included a huge wreath and a ladder! We also created two table set-ups – the first being a more luxurious table with a blush pink colour theme complete with bambi, beautiful linen and copious amounts of floral centerpieces accessorized with pearls. The second table was more understated and kept to a white theme with hints of green and silver above which hung an amazing chandelier of mistletoe. Lastly, I found a beautiful door frame which I was keen to use in the shoot because of the symbolism associated with carrying a new bride over the threshold. Cliché!

The Bride And Bridesmaids.

Deciding to use Debbie’s DC Bouquets hairpieces in the shoot was an easy decision for me having sought the opportunity to work with her since she designed a piece for one of my own brides this summer. If you haven’t seen Debbie’s beautiful creations then I suggest that you hot-foot it over to her site – once you’re done reading here of course. Debbie has recently launched a new range of headpieces which I really wanted to use as part of the shoot. Luckily for me and much to my delight she graciously agreed!

Cherished Vintage also kindly provided a glitzy headpiece too for the shoot which worked a treat with the pink bridal gown. Go see for yourselves….

Clare from The Wedding Club provided two beautiful vintage dresses for the shoot which completely contrasted one another. A beautiful pink gauzy one-shouldered number was just what we were after for the playful elements of the shoot whilst the sleek 1930s silk number was set off perfectly against the backdrop of the bronzed ferns. Clare has a fantastic range of vintage dresses at her boutique which made it really quite difficult to choose which dresses would be used in the shoot.

Special mentions must go out to Jade and Georgia, who were our wonderful make-up and hair stylists. Given that they had never met before, they worked with ease around each other to create looks that complimented the individual efforts of the other. Of particular importance to me was that each of the models had a distinctive look as I wanted to provide as much inspiration as possible for brides reading this post.

What I really loved was how Georgia was able to interpret Debbie’s beautiful headpieces in completely unique ways for each of the models. Thomasin’s backcombed style really brought the ‘Daisy’ headpiece alive in an edgy way whilst Imogen’s plaits added a softness to the ‘Clara’ headpiece. Lastly Emma’s side bun and ‘Bijoux’ headband really honoured the more traditional elements of the silk gown she wore.

I was really keen to have someone film ‘behind the scenes’ given the nature of the shoot and the huge number of suppliers involved. I’ve always found watching how a shoot/wedding comes together immensely satisfying and I also love the fact that this gives the viewer the chance to see the faces of those involved other than the models. The frankly brilliant Simon Clarke filmed and produced the video that you’ll find at the end of this post and worked side by side with Ann for the whole day to capture the magic. Simon was a treasure to have on the day and balanced the slightly female heavy group which I think Dave our groom was more than pleased about. Please take the chance to watch the gorgeous video – it’s fun, festive and makes you feel all gooey inside. 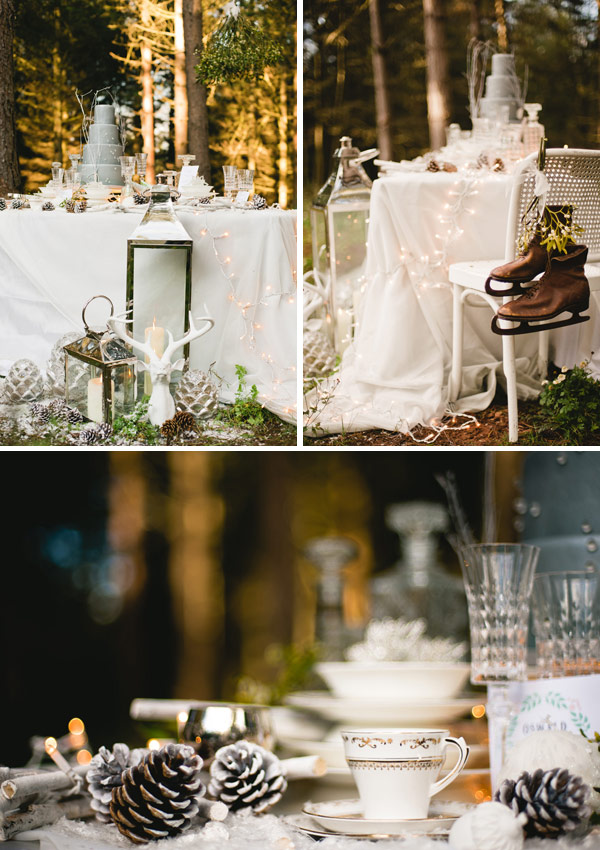 If you’re ever looking for Florists that don’t necessarily do things the conventional way then you need to see the work of the girls Ellie and Anna at The Flower Appreciation Society. Their website is a breath of fresh air and they are as gorgeous as the flowers they produce. They suggested that rather than using more predictable containers, that it would be fun to use a collection of swan vases filled to the brim of the most amazing white blooms with hints of green and pink tones.

The girls also pulled together a hand tied bouquet and a selection of beautiful buttonholes that smelt heavenly and included lilac, hyacinths, hydrangea, tulips, ranunculus, anemones, roses and gladioli. 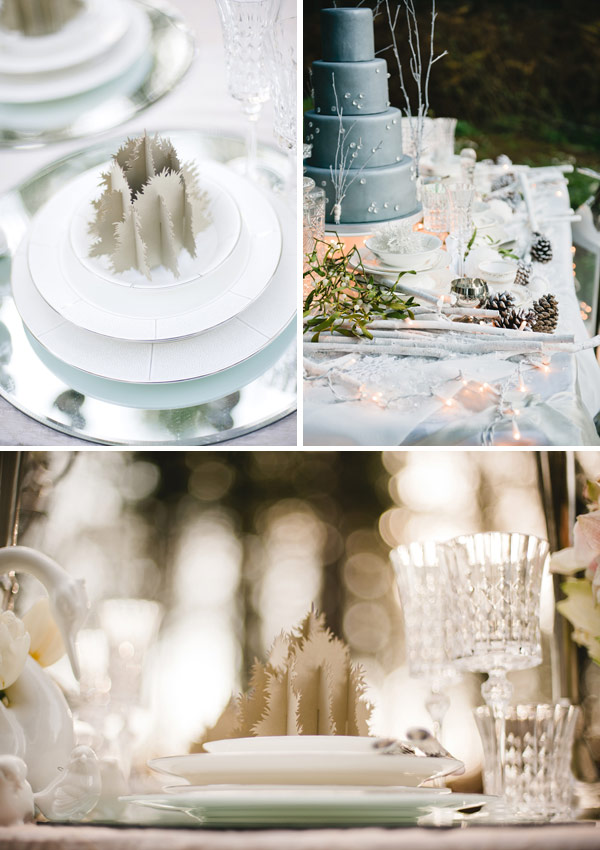 The stationery was produced by an amazing American designer called Megan at Mae Mae Paperie. She did the most amazing job of producing stationery items including placecards, a menu and an invitation suite that complimented the table set-ups all the way from across the pond. Thomasin Gautier-Ollerenshaw created the intricate and beautiful Christmas tree card sculptures that were used as favours.

Caroline – like many of the people on this shoot is one of those people who you want to hug when you first meet them. Her creativity knows no bounds and she is able to work miracles with anything of the cake variety. Caroline’s Cake Company generously provided three beautiful cakes for the shoot which were all completely different but which actually worked very well together. The smallest cake – a two tiered profusion of gold glitter with a delicate white flower offered a delicious contrast to the largest cake which was a more subdued affair but still elegant nonetheless. The third cake provided a huge dollop of fun with its bright colours and gorgeous glitter baubles on top, which offered a twist on a more traditional cake topper.

In The Bleak Midwinter.

I can’t finish this post without mentioning the amazing team of suppliers who worked with us to bring the shoot to fruition. They braved freezing temperatures and a couple of torrential downpours in the great outdoors with unfailingly large smiles on their faces. They also worked tirelessly to help me produce the exact scenes and shots that I wanted to very high standards, all whilst having a blast at the same time. I’m not ashamed to admit that I felt somewhat bereft after they all went home having spent so much time in their wonderful company; any bride who chooses one of the suppliers involved in the shoot is a very lucky girl indeed and I hope that you all find some inspiration here for your own wedding day.

I was stunned at how smoothly and seemlessly this ambitious photoshoot flowed together on the day. Especially for a team who largely had not worked together before, it was a marvel to see everyone muck in, get along and produce the fantastic results that we are sharing with you today.

I popped along to the Wyre Forest to meet the team during filming, under the premise of “helping out” but in fact all I did was stand around nattering, stole hot coffee from people who deserved it far more than me, and then on top of that I also managed to crash the video (result!)

Speaking of which – here it is, courtesy of Simon Clarke.

Styling and design Grace & Gable and Invitation Only

All other Headpieces and jewellery DC Bouquets

Accessories And so to Bed | House of Fraser | Westley Richards

I think that just leaves me to say – have a great Christmas everyone!

36 thoughts on “A Vintage Winters Tale.”