It’s apt that we are sharing a wedding by Phillip Allen aka Mister Phill this week, as his weddings are amongst the most emotively shot that we ever show on Rock My Wedding.

The ethos behind this wedding makes me think of all the things I would do if I did it again… the relaxed vibe, the chilled out bride and the beautiful great outdoors playing such a big part in their ceremony.

We (Stephen and Beth, as we are known) got married on Thursday 21st April 2011. Despite mid-week weddings gaining in popularity (I think due to both cost and availability), we felt we’d done really well getting this Thursday to be married. It was the Thursday before Good Friday, so the following day was a bank holiday. Not only was it significantly cheaper for us to hire our venue on the Thursday (even compared to the Friday), we were also able to use all of our preferred suppliers, as they were all still available – despite us being a little bit late booking certain things!!

Stephen’s very lovely cousin, Lou – who just happens to be an accomplished hairdresser, offered to do my hair for me, which I gratefully accepted. Lou did a fantastic job of interpreting what I was asking for – up-styles that were still quite relaxed and informal – tying in with the romance and whimsy of my dress. My hair looked amazing on the day – and still was in one piece by the end of the evening (a near miracle for my hair – I can tell you!) 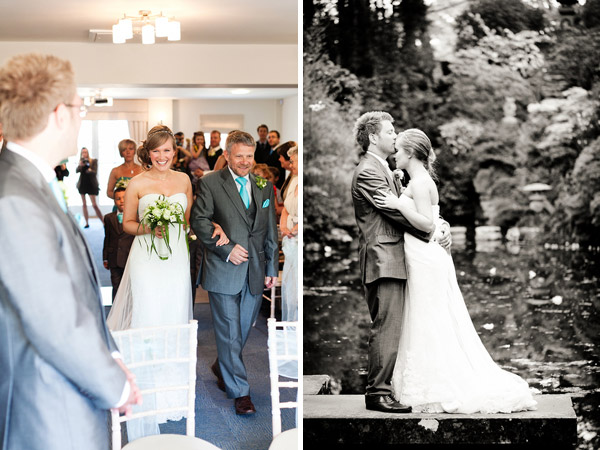 Lou had also, very kindly, offered to do my make up for me. I was having a spray-tan for the wedding (off-white dress against off-white skin = not a good look!) and so needed to get some new foundation, as of course, I would be darker than my normal skin colour. I had a “practice” with the spray tan a couple of months before the wedding (something I would thoroughly recommend – it gave me the confidence that I would be a nice brown, not an orangy brown, as my Mum was so concerned I might be). It also meant that I could take myself off to Bobbi Brown, fake tan in situ, and get some foundation and conceler that were the right colours for the “bronzed” me. Lizzie at Bobbi Brown was great – and I really recommend their make-up, it lasted all day. Lou did my make-up in quite natural coulors – shimmery browns for my eyes and pinks for my lips and cheeks. My make-up looked really lovely on the day – natural, but highlighting my features, and also looked great in the pictures. Lou, you are an absolute star xxx

I stayed quite simple with my shoes – 3 inch heels to give me a little bit of height (but not too much – I didn’t want to be towering over my 5’4” father as he walked me down the aisle!), Ivory satin peep toe shoes, which I bought online from www.1stforweddingshoes.co.uk. Because the bottom of my dress was lace, I was advised to stay away from shoes with anything attached to them, which might get caught in the lace! I also invested in some “clean heels” heel stoppers – hardly the most glam accessory, but they made walking on grass sooooo much easier…still had to take my shoes off for the beach though! 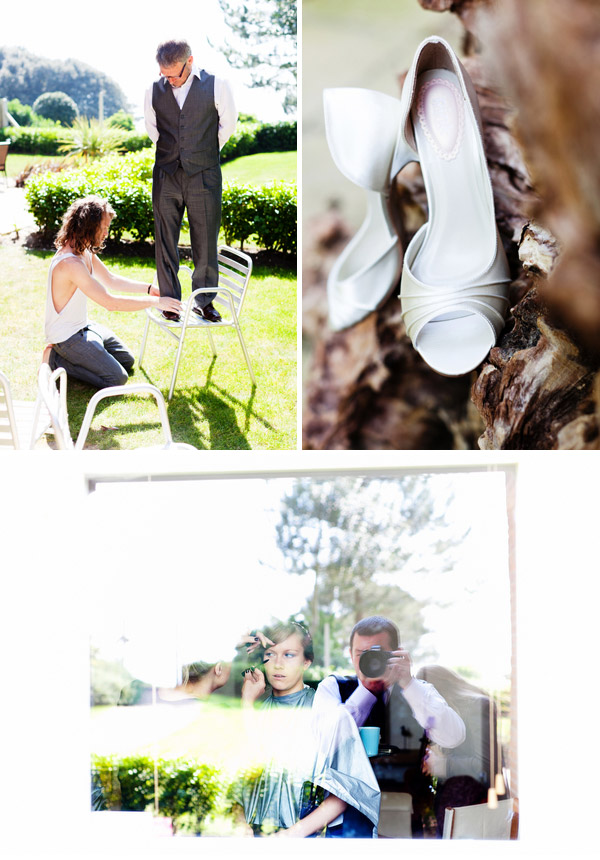 I had initially considered making my dress myself, being that dressmaking has been a hobby of mine for many years and I had always thought I would make my own wedding dress. However, on my Mum’s advice (which I would consider to be well-informed considering she made both her own wedding dress, and my sisters when she got married 10 years ago) I decided that, with all the other planning that goes into a wedding, making my dress might just be a little too much, so off to the shops it was… 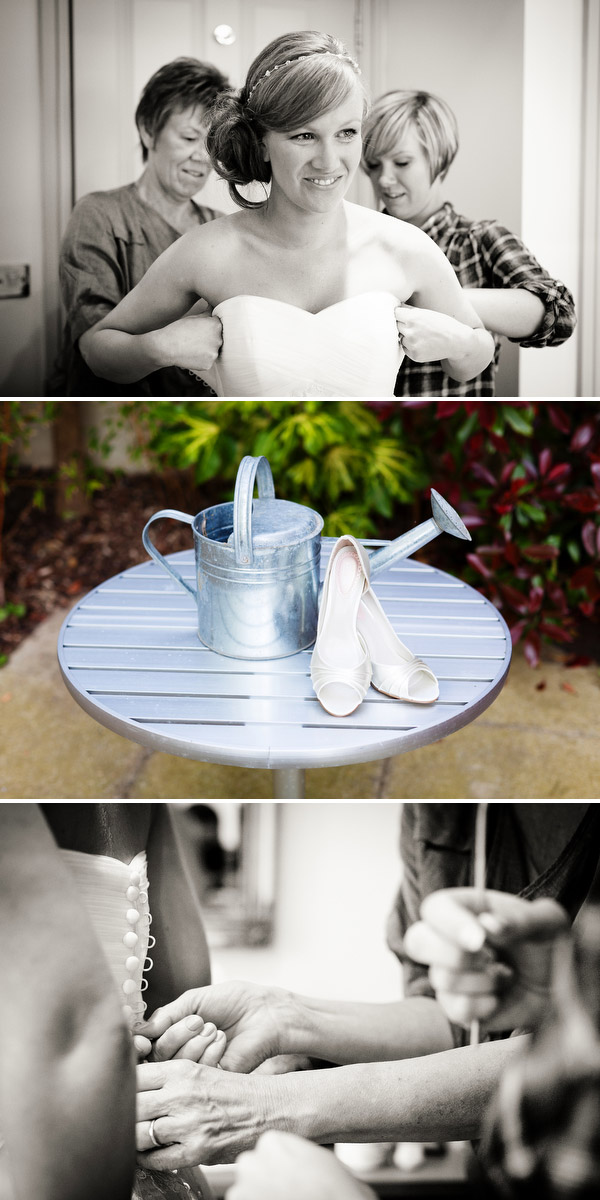 I started off my dress hunt with genuinely no clue of what I wanted (other than I didn’t want it to be the same as everybody else’s!). While this was a little daunting at the time, I think it turned out to be a blessing in disguise, as it meant that I really explored every available style and possibility. I tried on dresses from Alice Temperly to Monsoon – Liberties to a Vintage Dress shop my design conscious, architect brother knew of in Notting Hill. Although so many possibilities meant making a final choice quite difficult, I was also confident when I made a decision, that I wasn’t going to regret it or see something I preferred….plus I had an amazing time trying on all those dresses!! 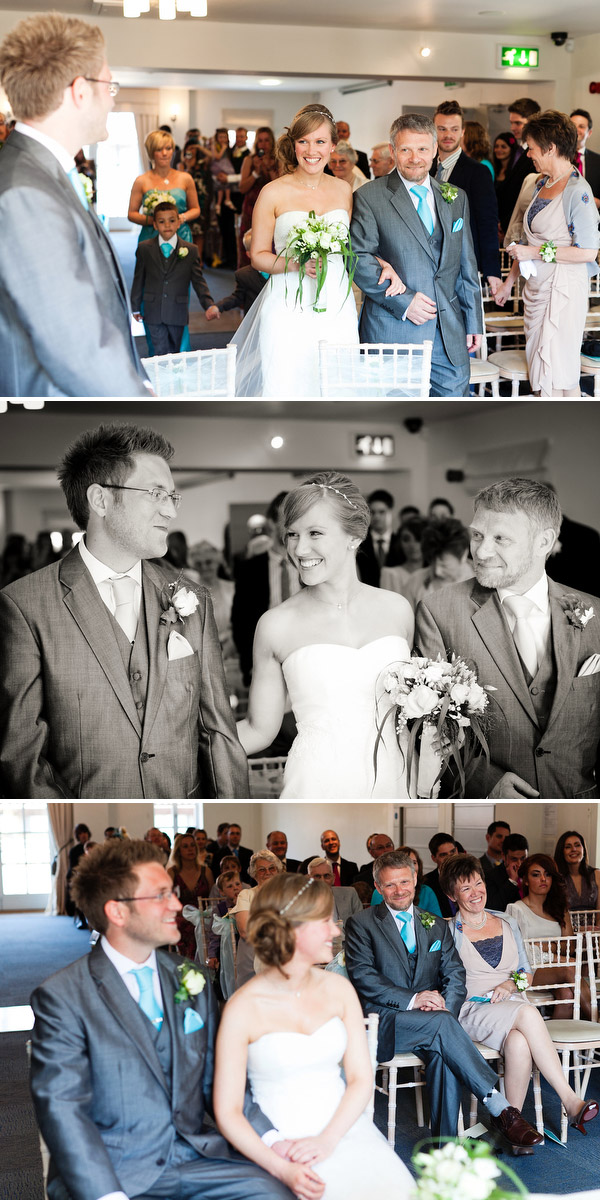 After such an extensive search, I ended up finding my dress in Daisy Bridal, a really gorgeous bridal shop in Bournemouth. The dress was by La Sposa and called “Denia”. It was a beautiful lace fish tail dress, with a tulle and lace overlay, which went into a beautiful train at the back. I must admit, that when I tried it on, I wasn’t hit with the thought that this was “the one” – but just that it was a really beautiful dress. It was much more “bridal” than I thought I would go for – I loved the Jenny Packham and Temperly dresses that I tried on, which were more of a Grecian style and had initially thought that this was what I would go for. My thoughts, however, kept going back to the La Sposa dress – and whenever they did, I would get really excited about it. I knew it would suit the elegance of our venue, but was also whimsical and romantic enough for our beach setting, and it was when trying it on for the 3rd time that I was certain it was the dress I wanted to get married in. I never once questioned my decision. Leanna and her team at Daisy Bridal were fantastic and gave me fantastic advice about the size, fit and style – even down to the type of accessories I should think about going for – and all their advice was completely spot-on. 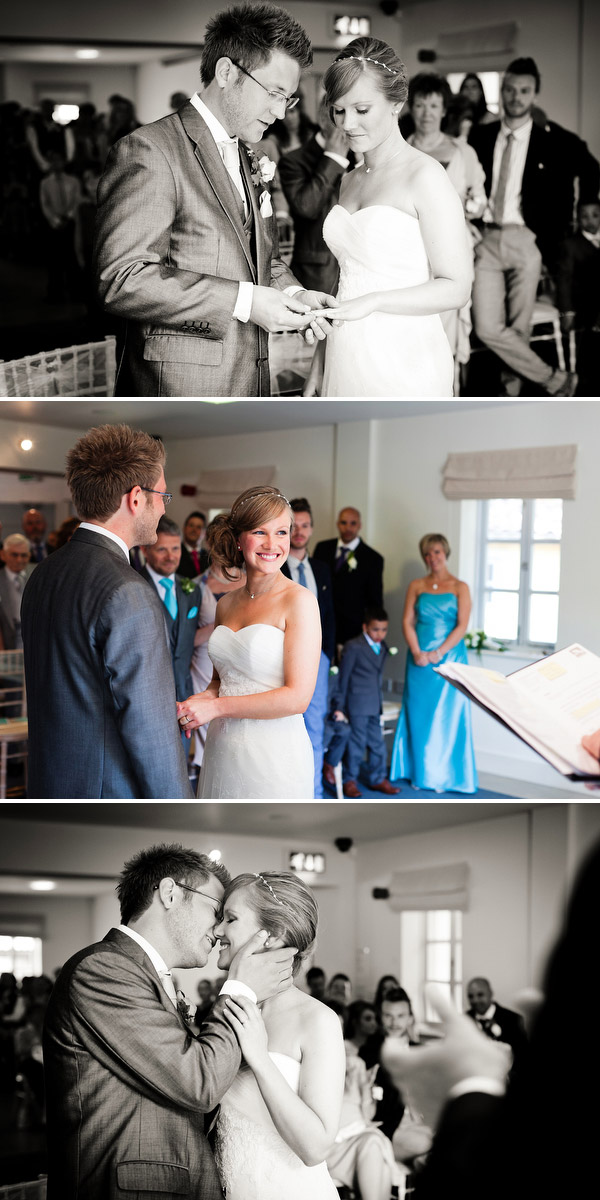 Because I am quite short and petit, I was a little anxious about over-accessorizing. My fear was that jewelry, or a headpiece that was too large would simply end up wearing me, instead of the other way around, and wouldn’t suit the delicate lace of my dress. I decided upon a hair vine, worn like a delicate headband for my hair, which I bought online from Essesea. My friend, Becky, then lent me her diamond earrings and diamond pendant (my something borrowed!), which were beautifully delicate and suited my dress really well.

We got married at the Italian Villa, Compton Acres – a beautiful venue set in 10 acres of gardens only a couple of miles from where we live. Choosing a wedding venue was certainly our first challenge – and it took some time to pick the perfect one. The problem lay in the fact that, as both great lovers of the beach, the sea and surfing, Stephen and I had our hearts set on a beach wedding – currently not legal in this country (our photographer brought the Any Campaign to our attention). We briefly considered a wedding abroad, where weather is more predictable, but threw this idea out fairly quickly, as we knew it would mean that some people who would be able to attend – and it meant that we would not be able to be as involved in the planning of our day as we would like to be. 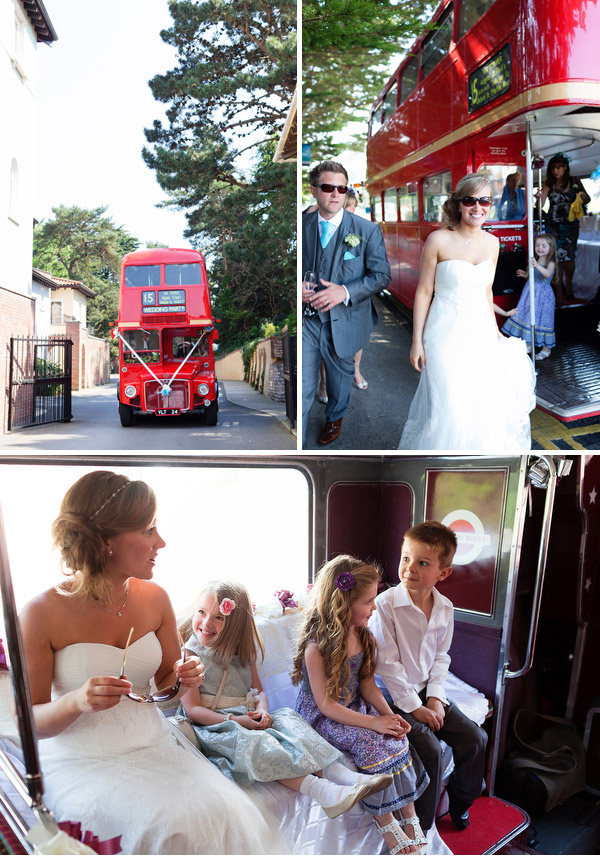 We spent some time looking at some of the beachfront hotels here in Bournemouth and Poole (thinking that, at least we’d be able to see the sea – and maybe have a drink and some photos on the beach), but none of them were what we were looking for. Either the style of the venue was wrong, or the capacity wasn’t enough. In our search, we went and looked at the Italian Villa and, although it was beautiful and perfect in every other way, it was a whole 2 miles from the beach!! We sat down and had a long think and talked it through. What we did know, was that we wanted a civil wedding ceremony, but with a Christian blessing as part of our day. 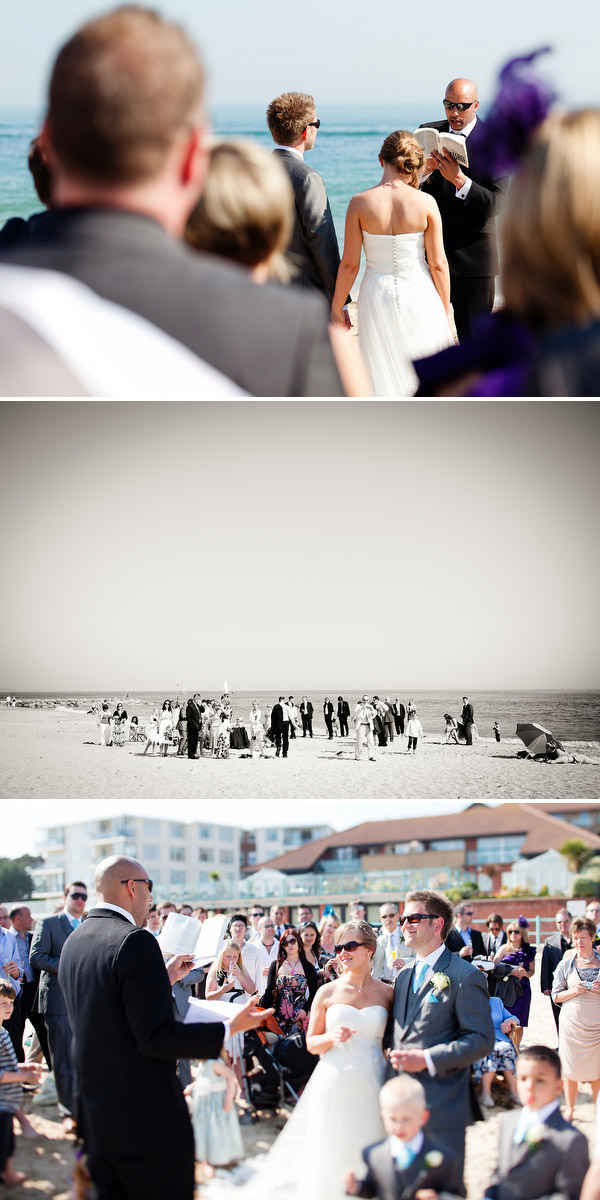 It seems so simple now – looking back on it, but it took a while for the penny to drop. We could get married at Compton Acres – by far our favorite venue, and due to it’s close proximity to the beach, we transport our guests down there for a blessing! We knew we couldn’t guarantee the weather, but we knew that, worse case scenario, Stephen and I would be there – along with my brother-in-law, Simon (who agreed to conduct the blessing) and to have just a small part of our wedding on the beach would mean the world to us both.

The beach was also really helpful to us, as it gave us a theme – a motif to run through our day.

Grey for the Groom

Stephen chose grey, three-piece lounge suits for him, our Dad’s, his best man and two ushers. The suits were by Peter Posh and were hired from “Well Groomed”, also in Poole We bought the ties and pocket squares separately online from Dessy as they did a really close match to Rachel’s bridesmaid dress colour – they did have to be fed-ex’d in from New York – but I’m afraid I’m a bit of a perfectionist, and it was the closest I could find! They looked so smart on the day, that it really didn’t matter. 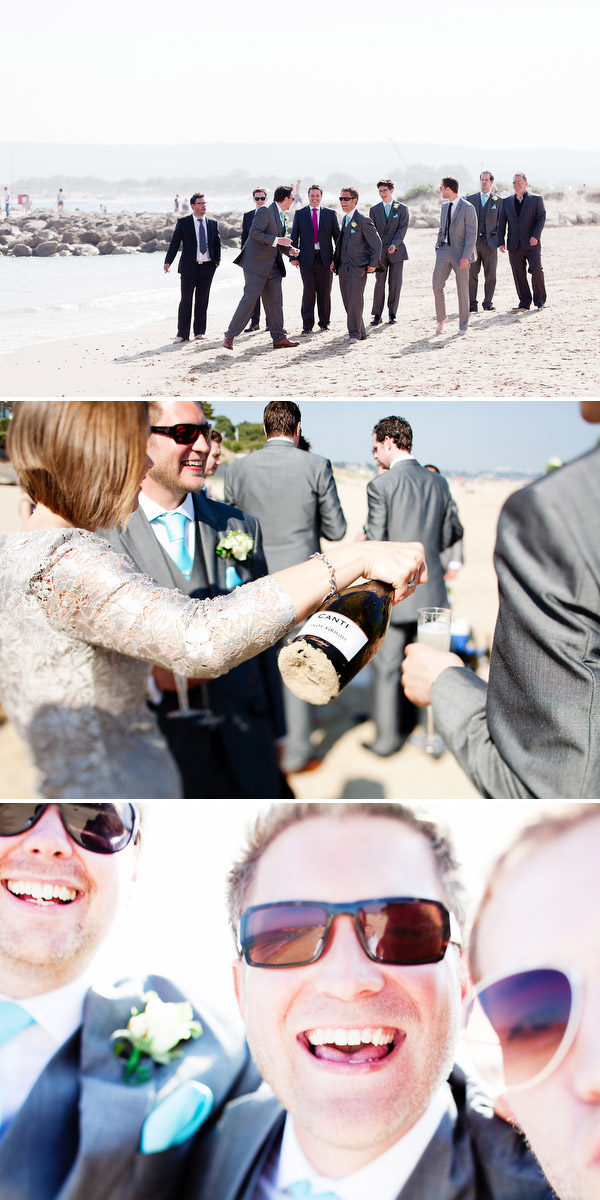 Stephen looked very handsome, but the thing that touched me most when I first say him waiting for me at the end of the aisle was just how excited he looked. He also looked incredibly nervous (I was late, and that is very much unlike me, which I think threw him a little!) but just so excited!

No wonder Stephen looked excited, what a beautiful Bride and what an amazing day – that blessing on the beach looks so relaxed and dreamy. Part 2 coming up in just a few hours folks!

You can find Mister Phill on The List, however, all real weddings are chosen on individual merit and no part of this post is sponsored.

Becky is at her happiest when dunking a slightly chilled chocolate digestive into a very warm, very milky cup of tea. She also loves her job and pinches herself every day to make sure that she isn’t in a graphic design dreamworld.
Tags:Beach |DIY |hair & beauty |real wedding