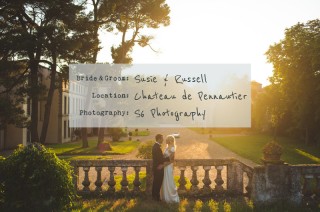 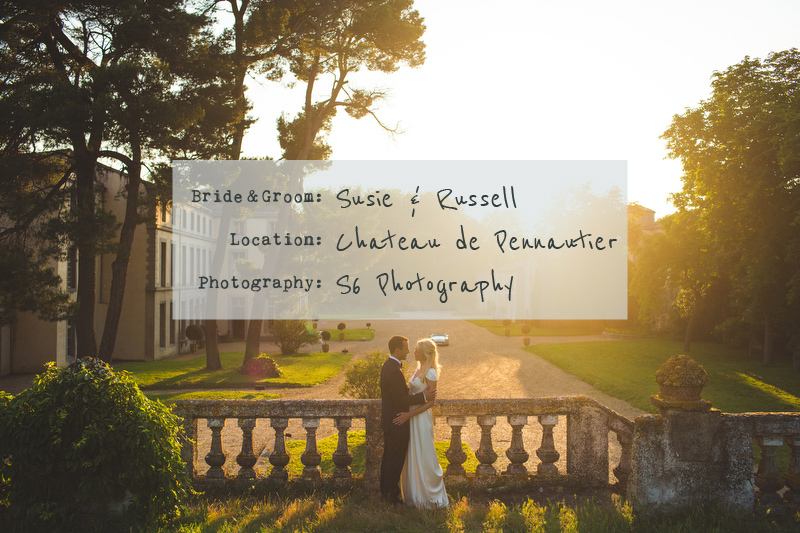 Ever since I sneaked a peek of this amazing wedding on our Facebook page last Saturday I’ve been itching to share this with you lovely lot. And from the super enthusiastic response you gave, it seems you’ve been eagerly awaiting its publication on the blog too!

For a start it took place in a blissfully romantic Château in France; I mean there are parquet floors and chandeliers and grand pianos and everything. There are also ponies which also get a huge thumbs up in my book.

But mainly, Susie and Russell know how to throw a darn good party; any wedding that still has guests dancing at 3am is a testament to that.

I guarantee that you folks will be pinning this big day to your hearts’ content. There are suave menfolk in black tie, beret favours (I know! IMMENSE!) handmade chocolates, a traditional French Croquembouche and hazy sunlight streaming through ancient trees.

Susie The Bride: With me being from Cork and Russell from Leamington Spa we were always going to have to ask the wedding party to travel one way or the other. Both of us pictured our wedding as being warm and sunny with great food and wine. Added to this we run an international events company and are often in spectacular European locations wishing our friends and family were with us – this was our chance to make that happen.

The South of France has been a special place for both of us. Growing up we both spent many family holidays in France and have many fond memories there. When we first met Russell suggested we travel to France together – at the time it was just small talk but a couple of months later, with the tent in the boot of his car we headed off for our first holiday – to France. We therefore had a strong frontrunner.

Having researched which parts of France would be most accessible for our guests by plane, both from UK & Ireland, we narrowed our search to Languedoc Roussillon. We packed up our tent and our tandem (yes – we are that cool) and spent a fortnight in July 2012 cycling from château to château looking for the perfect wedding venue.

Having visited about twenty different venues, we drew up a shortlist of three venues. However our first choice was always Château de Pennautier. As soon as you drive through the gates, there is that wow factor! It is a fairy-tale venue; the beautiful and extensive grounds, the absolutely unique rooms and importantly the wine all draw you in.

When it came to the preparation for my wedding hair and makeup, I can positively say I was a nightmare for my hair and makeup artist – Lauren Irwin. Having scoured wedding websites & fashion websites, I vacillated between different looks and styles, eventually settling on a natural look for both my hair and makeup. My dress was simple and I wanted this to be the case with the rest of the look.

However achieving this, is not always as simple as one would think and up until the morning of the wedding I hadn’t made a final decision on my hairstyle. Up or down, up or down? In the end, I settled for half up, half down with some skinny plaits to add detail. I was absolutely thrilled with the final result and Lauren did a fantastic job in taking my vague instructions and creating the final look. Most of the makeup used was Bobbi Brown, which lasted till 3am – at which point the lights went off in the honeymoon suite!

I am an impatient shopper at the best of times and there was no change when it came to the search for my wedding dress.

I initially visited a couple of vintage boutiques in Warwickshire and London, accompanied by my sister and mother, who were both thankfully brutally honest! While the girl in the changing room opposite was receiving ‘Ooohs’ and ‘Aaahs’ from her five bridesmaids, I had some very firm ‘No’ and ‘I don’t think so!’ responses to my selections!! This may seem harsh but you don’t want to make a mistake on probably the most expensive item of clothing you’ll ever buy and so I appreciated their honesty. I did however find a dress which was perfect in almost every way other than its price tag. So again I took the look and focussed on finding a dress with a similar shape and style. Elegant, sophisticated with a hint of a romantic bygone era.

I visited a few more dress shops alone and found that they all had a very similar selection and weren’t really offering the style of dress I was looking for, so again I took to the internet.

I found that J.Crew had a selection of different dresses, simple, classic and not outrageously priced. Their customer services team were extremely helpful in answering questions on colour, size, delivery and returns. Nervously I placed my order and held my breath! One week later my very special parcel arrived with the most stunning dress, which fit perfectly and was exactly what I had been searching for! Simple, elegant, with some antique style detailing, I had the dress of my dreams.

Once I had my dress I was able to make decisions on completing the look. A wedding is possibly the only opportunity in life to wear a veil and my dress lent itself to a very simple veil. I found exactly what I was looking for on the Not on The High Street website from Faulkner & Carter London – a silk tulle veil which was the length of the train on my dress and complemented the dress perfectly.

Finding the perfect shoe was a little more challenging. As I wanted something I could wear all day, the shoe need to offer a little support, without being too high (I am already 5’11) and also reflect the elegance of the dress. Rachel Simpson, offers a beautiful selection of wedding shoes, which have a vintage flair but are beautifully made.

Luckily living in Leamington Spa, I am not too far from their warehouse shop where I was able to try the different options before settling on the Mimi, which I added some sparkle to with some shoe clips, which matched the detailing on my dress nicely. As I wanted the dress to do the talking, I avoided any bold jewellery and settled on a pair of vintage style pearl earrings to complete my look.

I made the decision early in life that if I got married, my sister would be my only bridesmaid. I have one sister and although there are over six years between us, we are very close and so Veronica was my natural choice. Equally Russell’s brother, Ryan is his best friend and was Best Man for the big day.

Veronica and I spent a day shopping for bridesmaid dresses and once I knew which colours worked on her, I set about searching. The dress had to be lightweight but elegant. Again I settled on a J.Crew dress buoyed by my success with my own dress. I was lucky that I only had one bridesmaid to dress, as I was able to focus on what suited her and also I was able to budget a little more with only one to spend on.

The colour scheme was also dictated by the bridesmaid dress, which was a spiced wine. We were not strict in having everything exactly that colour but used a palette of colours based around that tone. I love the antique / vintage look. Given the elegance of the chateau, I erred toward a more elegant antique look rather than the shabby chic (which I also love).

Russell has two nieces, Monica and Elsie, who acted as flower girls on the day. They looked like two princesses in their cream dresses from Debenhams. Again I chose dresses and shoes based on comfort. We knew the weather would be warm and wanted to make sure that they were both able to run about freely in their fairy dresses. Their ballet pumps came from Next.

Russell again had some firm ideas in his head on the look he was going for. Marrying abroad meant that renting suits would be costly and in the anticipation of good weather Russell didn’t want to go for a traditional morning suit. Russell often wears suits for work and for the wedding wanted something which was not just another work suit. Eventually he settled on a French Connection navy tux trimmed with a black satin collar. The Best Man and the fathers wore fitted black tuxedos by Cerruti.

In early February Russell & I paid a second visit to the Chateau to familiarise ourselves with its layout and location, along with meeting our suppliers who include our fantastic florist Sarah Menager, who came highly recommended by Sabine our contact at the Chateau. I had some firm ideas on what I wanted and shared some pictures with Sarah, who executed my ideas perfectly.

My bouquet was a mixture of wild roses, peonies and other seasonal flowers, predominantly cream but with the purple and pink tones from our colour palette. For the church we had some urns filled with hydrangeas and a small garland of mixed flowers on the altar. Sarah used lovely antique style silvery vases for the flowers on the tables for at the reception. The tables were completed with seasonal berries which were delicately strewn down the centre of each table.

We chose a banquet layout, as it worked well in the room which was rectangular in shape. With five years of event organising experience we knew that once noise levels increased the traditional round tables leave you only able to talk to your direct neighbours (one of which is probably your partner). With the banquet layout you have five immediate neighbours which really helped conversations and built a community feel, rather than creating isolated circles.