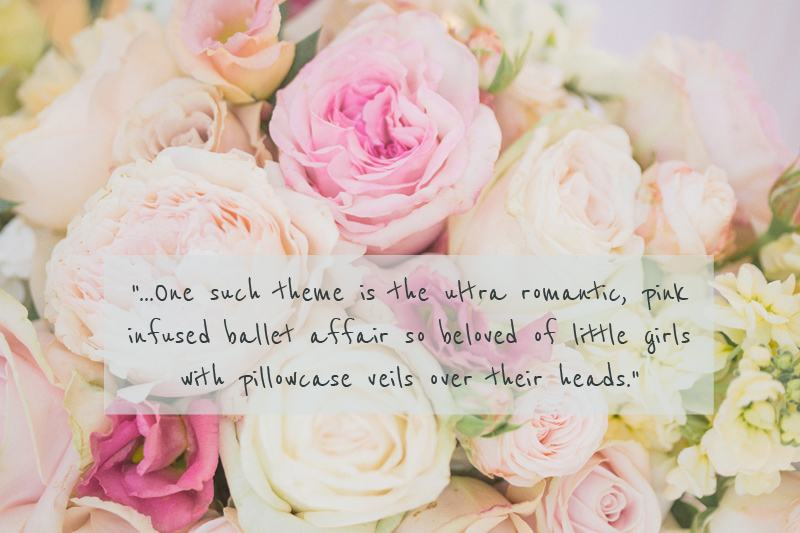 If you stopped by the blog on Friday last week folks you can’t fail to have noticed Charlotte’s sneaky peek of this week’s theme; The Ballet.

Whilst the Blog Queen herself will reveal all tomorrow afternoon – the RMW editorial shoot that is, she’s not getting her kit off – I’ll be sharing the inspiration behind said theme in this afternoon’s post where we’ll cover everything from frivolous fashion, luxurious decor, sweet treats and the most beautiful hair and make-up ideas that you’ve clapped eyes on for a long time.

As a team we often spend large amounts of time discussing wedding trends and big day inspiration…yes even Adam too. We talk about what makes you tick, the next big thing on the wedding horizon, themes we love, colour schemes that make us swoon and even those trends that may have dropped off the radar.

One such theme is the ultra romantic, pink infused ballet affair so beloved of little girls with pillowcase veils over their heads. Somehow as we’ve aged, this candy coloured dream has fallen by the wayside in favour of rustic soirees, or hip city dos and this makes us sad. Gone are the dreams of the super feminine big day, dusted in pink complete with bows and satin and voluminous dresses and all-rose bouquets.

Or so you thought.

You see folks, garnered by the RMW spirit we’re determined to bring it BACK. Just like the once out of favour peach colour schemes, we want to show you how girly pink wedding themes can be cool again.

Let’s see what you think.

Dance Of The Sugarplum Fairy

Granted most ballerinas are probably not indulging their sweet tooth on a daily basis but given that classical ballet has its origins in the patisserie centre of the world (France) it seemed daft not to include some cakey treats in the editorial shoot.

And it’s all about the detail this time lovelies…detail and miniatures. Think cutesy details, ruffles, intricate piping and romantic shapes. We fell head over heels for hearts, for rose-infused flavours, for dustings of icing sugar and iced petals.

And then there was the beautiful display of such delights, on glass cakestands, within sugary coated boxes, on golden plates, all piled on top of one another. There’s something to be said for beauty in numbers…wouldn’t you agree?

A Rose By Any Other Name

If there’s any single flower that’s associated with ballet or indeed the stage then it is the beautiful Rose. Just think oodles of all those blousey blooms being thrown at beautiful ballerinas at the end of the night in appreciation of their talents.

There’s something timeless about the Rose, its unrelenting beauty, its womanly charms and sophisticated elegance. This is a bloom that will always take centre-stage.

From the get-go, we were determined to use the flower in all of our floral associated styling – from the table centrepieces to the bouquets and even the smaller prop related scenes too. Quantity was key, volume the watchword; it was less about the foliage and more about the flower itself.

Big, blousy, full-headed blooms in pinks, creams, off-whites, caramels, blushes, peaches with maybe even a splash of yellow here and there. Our preference was for roses of the older varieties with amazing scents like the O’Hara. We chose to follow two different directions when it came to our bouquets too – one that fitted with the more traditional ballet look and then another that was less structured, more ethereal.

We can’t wait to show you the results…

See You At The Make-up Barre

Whilst I don’t want to give too much away at this point I will say that the traditional ballet bun was definitely a must have for Charlotte and I – you may even have seen our sneaky peek of our ballerina on both of our Instagram walls – see here and here. In fact we love the ballerina topknot so much that we always squeal in glee when we spot a bride that chooses an updo for her big day.

The beauty of the stage and actually for a bride on her big day is that all the normal rules can be thrown out of the window. If you want glitter on your eyelids, a metallic catflick or the longest of (fake) eyelashes, nine times out of ten you can get away with it. Perhaps not so much with the smokey tulle and net creation near the bottom here but you catch my drift.

Exquisite hair and eyes ‘looks’ were a particular focus for us in this piece of editorial and much like the classical ballet of Swan Lake there was most definitely a White Swan/ Black swan split.

Set For The Stage

Perhaps my favourite part of any editorial shoot apart from the florals (never going to give up that wannabe florist ghost) is the prop and tablescape styling. Whereas Charlotte is the fashion, hair, make-up queen, I revel in decor detail. Give me a table and some linen and some utensils and I’m as happy as a pig in mud.

I’m not going to go into detail…after all I cover the inspiration for the tablescape styling in tomorrow’s post but what I will say is that there are stripes, and lots of shimmering gold details and pink glass and cut crystal. There are blooms a-dozen and rose petals and the sweetest pieces of stationery DIY that are as easy as pie for you lovelies to download and recreate.

And yes there are pointe shoes and ribbon and so much pretty that your heart aches with the beauty of it all.

So then are you excited? Have we whetted your tastebuds?

Can you wait until tomorrow afternoon?

I’m not sure we can…

P.S. You know that image of the model in the frothy delicious pink dress by the sink at the very top of the post there? Well that was the very first image I ever ripped out of a magazine for my wedding inspiration. I think I was thirteen years old…They say that it never leaves you.

Lolly is a self-professed frustrated florist and styling maven with an endless passion for all things pretty.
Tags:Decor

20 thoughts on “Ballet: The Inspiration.”