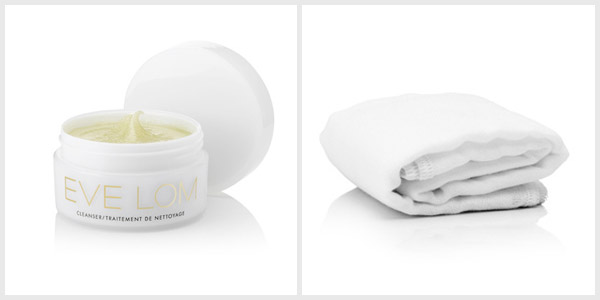 Everybody knows I’m a massive Eve Lom Fan. I’ve been hooked on the cleanser, the moisturiser, the rescue mask, the eye cream… (the list goes on) since a few months before my own wedding and have used it religiously ever since.

However there has always been a niggling thought at the back of my mind – at £50 a pot it’s not cheap and there are several other ‘hot cloth’ cleansers on the market these days that also receive rave reviews for a fraction of the price. So on a budget drive recently I decided to purchase Liz Earles Cleanse and Polish cleanser and I thought I would share the results with you all, so you can make your own minds up.

The Hype – Described by Vogue as ‘the best cleanser in the world.‘

Looking like a very beautifully packaged tub of vaseline, Eve Lom Cleanser has quite a medicated smell. Packed full of herbs to sooth, deep cleanse and regulate your natural oil balance, (hence also managing spots) this is a smooth-on, massage-in cleanser, which melts into your skin before you buff it off with the muslin cloth soaked in piping hot water.

In fact, it’s not that easy and fans of a bedtime ritual will love the Eve Lom 6 step cleansing regime. Yes. SIX steps. If you’re a wash and go girl then it’s not for you. In brief, the idea is that you smooth a small amount all over your face and then, using the tips of your fingers, perform a series of pressure point massage techniques to aid lymphatic drainage. The cleanser turns from vaseline-like to almost as fluid as oil (no dripping though) and your hands really glide over the skin releasing all the oils and stimulating blood flow too. Once you’ve massaged you hold the cloth soaked in hot water (as hot as you can bear) against the skin to further melt the cleanser and scrub it off in a circular motion. You can follow with a cold cloth before patting dry and going.

It’s expensive but you don’t need moisturiser, toner, eye make-up remover and each pot lasts me around 4-6 months, (usually 6 as there are inevitable nights I don’t bother – did I just say that?)

The Hype – ‘We only make one cleanser because this formulation is the ultimate in concentrated yet gentle cleansing power and works on every age and skin type.‘ 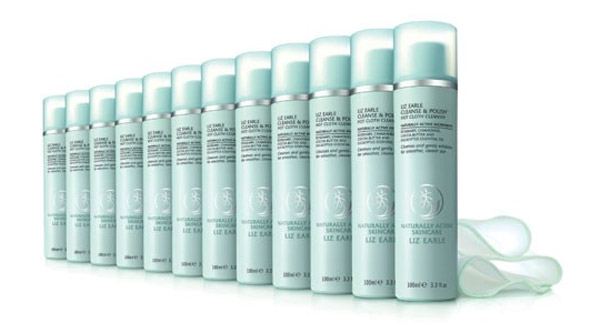 The Liz Earl cleanser is much more of a ‘cream’ and comes in a pump action dispenser which pushes out a thick rope of white pearly cream that resembles sudocrem. So far so similar. When applied to the skin the cream does soften, but doesn’t melt as well as the Eve Lom. There’s no ritual to follow but you could use the same technique and no doubt experience the benefits too and the cleanser has a tinge of eucalyptus smell about it which is satisfyingly refreshing.

There’s the exact same method for removal too, use a hot muslin cloth to polish off the cleanser and pat dry. Voila! You’re in the club.

For me unfortunately, the similarities end with the muslin cloth. I so deseprately wanted Liz Earle to live up to the hype and to save myself a fortune, but I can’t say I love it nearly as much as Eve Lom.

I don’t like the lack of melty-ness to the Liz Earle and it’s not just a textuaral feeling. Each of the muslin cloths are exactly the same – a double layer of muslin with quite a loose weave stitched together. I don’t think the Liz Earle gives nearly as good an exfoliation because of the heaviness of the cream which I think then sits or sticks in the gaps between the threads and creates an over all smoother cloth.

Secondly, it’s not a one stop product for me. It doesn’t get rid of half of my mascara and for someone who doesn’t even wear a ton – I’m a one coat girl – thats a major annoyance. It’s on my pillow, panda eyes in the morning and usually I don’t even need to apply again in the morning because some is still on my lashes. Not cool.

Lastly, the all important skin result… On the spot front, I don’t think they differ. That is down to your skin itself. One thing that Eve Lom does give though (and look away now if you’re a hands off type) is amazing softening so spots are much easier to pop if you just can’t resist. In fact, the exfoliating action often removes them before you get the chance whereas I didn’t find the Liz Earl as softening.

On the condition of my skin overall, again I was disappointed in Liz Earle. One of the things I love about Eve Lom is the fact that I don’t need to moisturise afterwards unless it’s the depths of winter and I’m really dry or flaky. And when I wake up, my skin is happy and healthy. Liz Earle is similar in that I don’t need a moisturiser, BUT my skin is oilier than it ever has been with a massive shine problem when I wake up, never mind battling it through the day.

So, it’s a damning verdict and I’m really sorry for being so harsh, but this is just my experience. I know there are loads of women out there who swear by Liz Earle and probably lots who don’t think Eve Lom is a justifiable price to pay. There are down sides and negatives to Eve Lom too, after 2 years of use it was a rare occasion you found me performing the six step technique religiously and don’t even get me started on the price but it still wins by leagues for me. If you’re thinking of trying either then I’d suggest trying the starter kit (Eve Lom even do sachets with a mini cloth) – both women do them and as every persons skin is just as different as your weddings should be, then it’s worth trying them out first.

Do tell me your experiences with Liz Earle and Eve Lom, or if you’ve tried another hot polish cleanser I should try before I go straight back to the Eve Lom Counter, credit card in hand. 😉 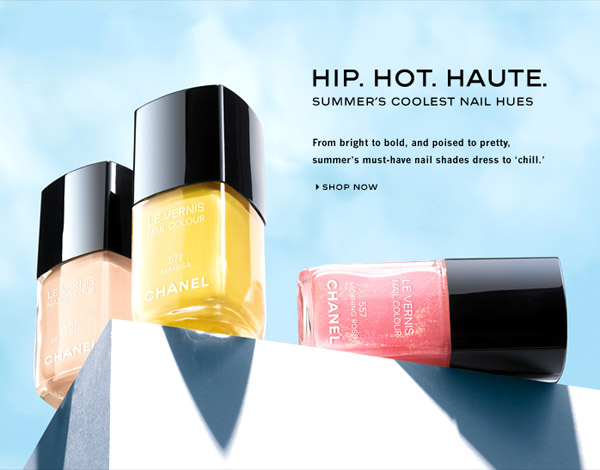 Given the appalling weather it’s perhaps appropriate that I share my reasoning behind writing this post… I have been inspired lately.

It’s been a few things… firstly the Dolly shoot reminded me how much I love colour on my face after months of dallying with neutral eyes.

Secondly, the changing weather made me realise it was time to put a bit more colour back into my face. Hello sexy shimmer…

Thirdly, my nails have been naked and boring for all of a few weeks now and I’m crying out for a change. A brightly coloured, juicy looking, shiny type of change.

And lastly, I realised how dreadfully neglected my body is looking after unwrapping it from the winter woollies. Shocking is not the word.

So here is what I’ve been doing about it!

Colour blocking is a godsend for me, in fact I’m pretty much loving all the fashion trends right now, but particularly the colour and it spilling over into nail colours for Spring/Summer. Every year we get the official ‘colour of the season’ for nails from the beauty oracle that is Chanel, and this year is no exception. It’s all about Mimosa.

Not only a delicious drink, this is one gorgeous shade of yellow. I had my nails painted yellow on my hen do so I have a particularly soft spot for it and this is no exception. Mimosa launches tomorrow at Chanel counters nationwide. Get yourselves down there immediately for a sniff of the action!

Of course, it’s not all about yellow, tropical nails are all in and if you fancied a budget solution how about hitting Topshop? Their make-up range also includes nail varnishes and this very reasonably priced yellow shade for £5! Even better, purchase a copy of this month Instyle Mag and you get a free shade of Nails Inc varnish specially created for the magazine. I bought the orange one and it’s been brightening up the view of my keyboard all week. I couldn’t resist including this blue shade too, also from TopShop if you wanted to replicate Gemma’s ‘Something Blue’.

Make-Up was a big focus of our Dolly shoot and much as I loved them all (erm, who would have chosen yellow for an eye shade before clocking Dolly Daydream?) it reminded me of one of my all time favourite shadows… as demonstrated by Dolly Rock.

I have very pale greeny-blue eyes and MAC’s Parfait Amour makes them intensely green so Dolly Rock had me hot footing it back to MAC to replace mine. I also rooted out my favourite green MAC shadow, Steamy, which looks fab with a tan and some chunky gold jewellery on holiday, and might (*oops*) have also purchased some MAC pigment in Violette. I am so set for summer 🙂

(Please note the colours above are really dull in comparison to the actual shades, do go and check them out if you fancy a splash of colour!)

Coming into spring my skin was starting to get a little lack lustre. Although I often see highlighters used in magazines I never seem to get any effect from them under other products, so I decided to switch my usual Laura Mercier tinted moisturiser for her Illuminating tinted moisturiser. You could use it mixed with your usual one but I have been known to use it all over without looking like a pearlescent alien, it really brightens up your face like no other.

I’ve also found a new favouite mascara. In blackest Black, Cliniques new High Impact Mascara legthens, separates and thickens lashes. I’m currently using a sample Charlotte gave me when we were away together but I’ll definately be replacing it when it’s run out. Lastly, I’ve switched back to my favourite peachy-gold toned blusher for a more natural summery glow, Orgasm by Nars. Ooh la la!

Really, my body is far from beautiful right now, but my biggest problem is those much talked about little bumps on the tops of your arms. I was horrified to find them lurking after months of no sun and exfoliating conveniently slipping to the bottom of the to-do list as many a blog post took over.

So now I’m on a mission. I’ve whipped out the usual suspects for buffing that backside (- read my favourites by clicking the link) and am full on preening myself back to smoothed out softness. My Mum has amazing skin and has always religiously exfoliated so I won’t be letting that habit go again in a hurry.

So now it’s your turn. If I’ve made you consider some of the above purchases do tell, but this blog queen is still in need of some serious beauty overhaul help. And where better to get it that by appealing to the RMW genius beauty community?

I Need to know…

What shade are you rocking on your nails today?

After suffering an almightly hair fail at the hands of 2-in-1 shampoo and conditioner, (lank and flat locks my punishment for laziness!) I’m thinking it’s time to treat them again… I used to love Kerastase shampoo but I fancy a change. Any smell-great but actually do the job choices from you lovelies?

And lastly. The biggest question. Can anyone help me make my hair beach wavy for summer?!