I’ll be honest, I had a bit of a panic attack over the summer about the wedding organisation. I think I spent sooooo much time looking at all the pretty that I drove myself nuts trying to narrow it down and it ended up whirling round in my head. I even had a few sleepless nights because I just couldn’t get a clear vision of what I was doing on any one thing so it just kept going round and round (anyone else felt like this?).

Since the kids went back to school at the beginning of September, I’ve been trying to get on with the wedding planning with the focus being on *doing* rather than *looking*. It’s definitely helped now that I’ve started making decisions and booking things as I can start ticking things off on my list. It feels like ages away yet but in reality it will go quickly, especially as I have a 13yo birthday ‘Mad Hatters Tea Party’ to arrange in November and Christmas to get through between now and the wedding!

I love my food but because of my dietary restrictions, it’s never a simple affair. We’ve been putting a lot of effort into finalising what food we’re having on the day as I can’t get the menu cards printed without this info.  Because we need gluten, nut and fish free options, it has been a bit complicated but we went for our final food tastings last Friday and here is what we’ve chosen… 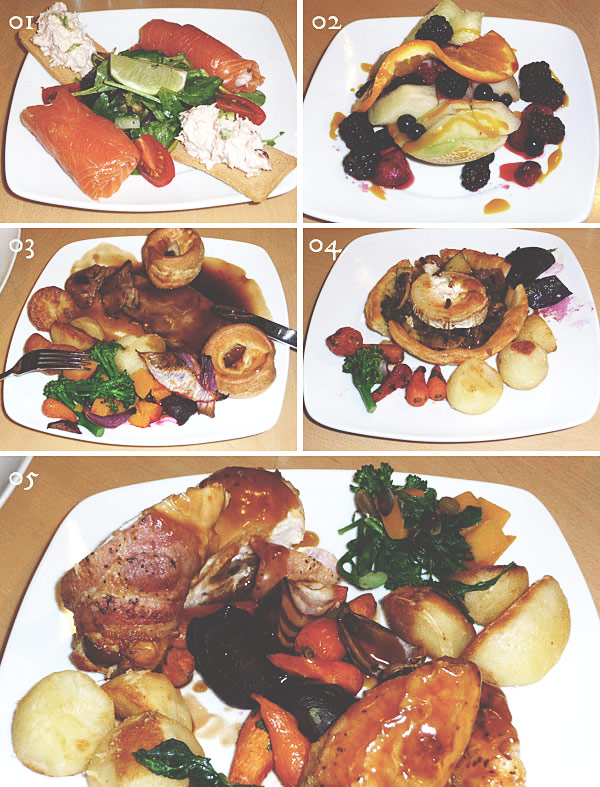 Burnham Park have been great at trying to accommodate the various dietary requirements that I’ve thrown at them and were willing to take on my challenge of making a gluten free savoury tart – not many places would – and I was very impressed with the pastry. We discussed a few tweaks to the dishes, which they were more than willing to accommodate and we left with full tummies – hurray!

Wedding cake is hard for me as I obviously can’t eat a regular cake, and even gluten free cake gives me stomach ache, so I’ve been on the hunt for alternative options. I’ve considered many things including a rice crispie cake, chocolate boxes, a chocolate fountain, chocolate mousse cake, gluten free cookies, a sweetie cake and even jelly! 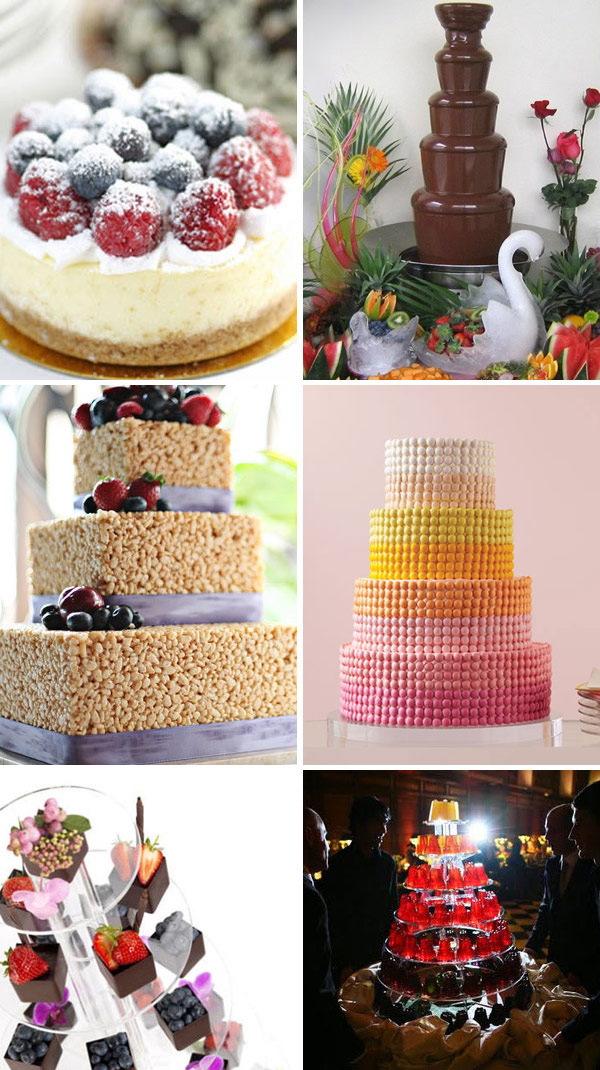 To save some money, we’ve decided not to serve a separate dessert – we didn’t see the point in spending money providing a dessert AND wedding cake, plus it’s a great way of saving money (at least £5 per head). My final choice on wedding cake is to make my own gluten free cheesecake as I cannot find anywhere that will make one for me (if you know of anywhere please let me know!!). To this end, I have been serving up cheesecake on a regular basis in our house! I came across a very light and delicious orange cheesecake recipe on the BBC Good Food website, but I can’t get the topping right! Here are a couple of my attempts: 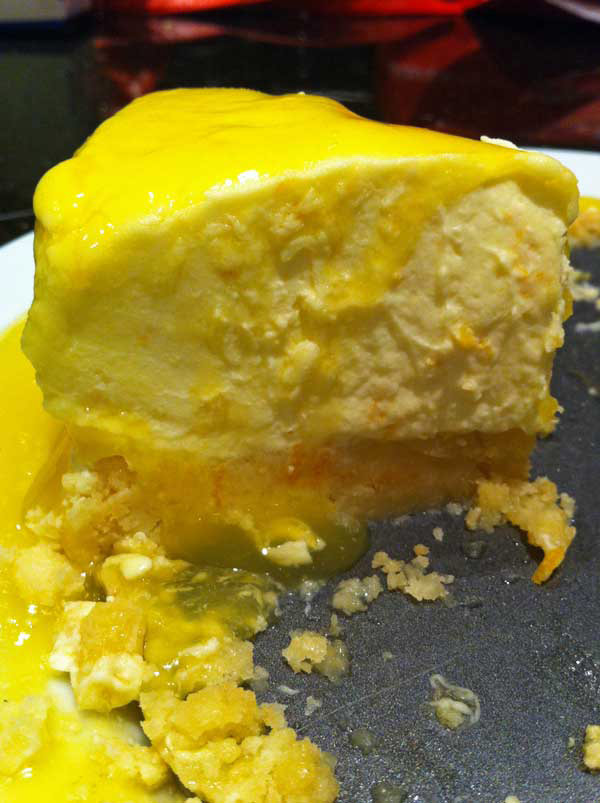 This is orange cheesecake with an orange glaze which is *supposed* to sit on top of the cheesecake, but it didn’t set so when I took the cake tin off, it all slipped down the sides! It didn’t stop anyone from eating it too fast for me to get a picture of the whole cheesecake though – this is the last slice! 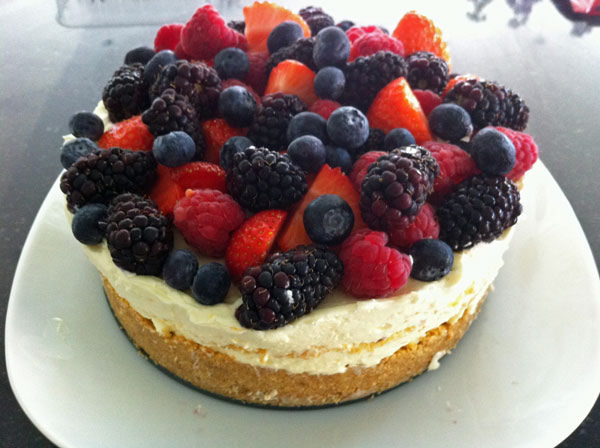 This is the same cheesecake (different day!) but with fresh berries on top.  This was too difficult to cut easily and it doesn’t tie in with my colours very well but it tastes good! For my next attempt I’m going to try some orange coloured fruit sliced on top – maybe apricots, what do you think?

In the evening we’re having cake pops, which unfortunately aren’t gluten free, but look soooo amazing that I *need* them. I’ve ordered 120 from Pop Bakery and owner Claire O’Connell has been really helpful in sorting out contemporary designs in my chosen colours. 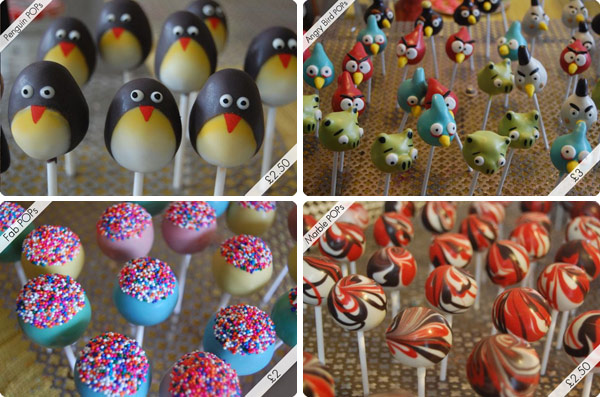 I think the Angry Bird cake pops are pure genius but I’m going for something a little more conventional with glitter, drizzle and love heart designs in my orange & turquoise colour scheme. These images just show how talented Claire and her team are! I’m so excited to see them, can’t believe I have to wait 6 months!

I’ve also been working hard on flower choices. This was an area that I wasn’t going to spend much money on, until I fell in love with this picture:

I *needed* them BADLY … until  I found out that a florist would charge £165 per medium sized flower ball to make one of these up!! I nearly fell off my chair when I found that out! So I’ve been doing plenty of research to see if I can have these balls at a cheaper (bargain basement) price.

I tried making my own to see how difficult it was … Answer: it’s not hard at all, or even that time consuming but I was worried about whether I would have time to do 24 of these a day or two before the wedding. I did consider having a flower party with as many people as possible stuffing oasis balls with carnations! It cost about £15 to make the flower ball below including the oasis and then dish that it sits in. I used chrysanthemums because that’s all that the flower shop had in large enough quantities, but I’d need a similar number of carnations.  You could do the same with roses (though you’d need more), gerbera’s or dahlia’s. 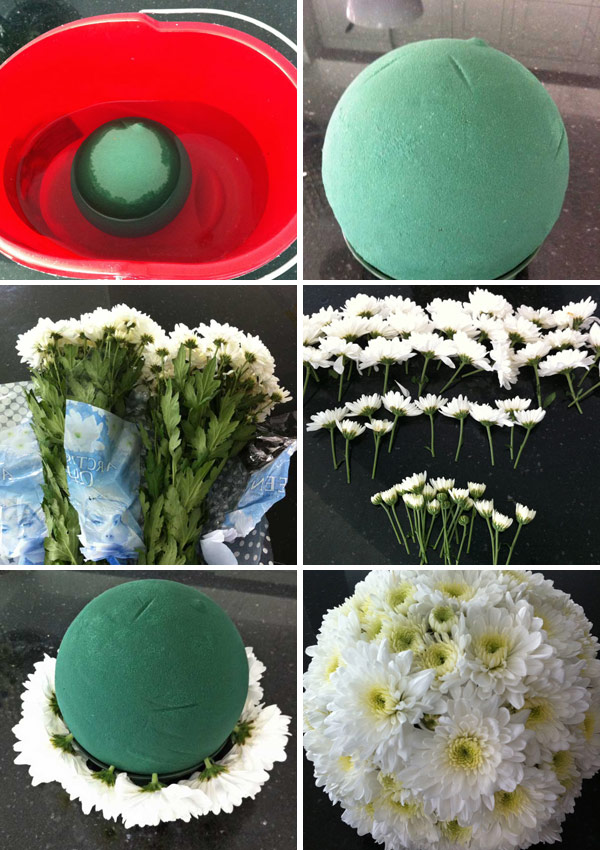 Tada! It looks pretty good doesn’t it?  It only took me about 30 mins to make this, and that was including me not having a clue what I was doing and making it up as I went along J I reckon with practice you could probably knock one of these up in 5-10 mins.

Then I found some seriously cheap silk carnation heads on eBay – 250 of them for £20.00 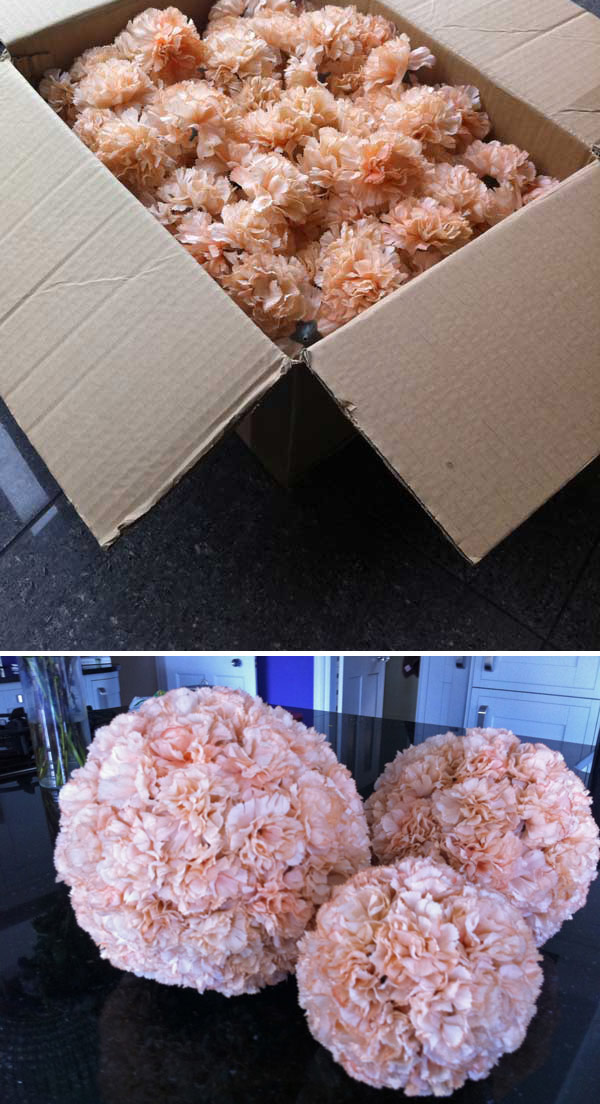 So I decided to order some more oasis balls and have a go at making some artificial flower balls on the basis that if I could make them months in advance then that would relieve the time pressure:

They actually look pretty good – you can tell they’re not real if you get close enough but they don’t look obviously fake either and with a spritz of perfume they might pass inspection.  The downside was realising just how many carnation heads I need – 26 for the small ball, 51 for the medium and I lost count on the large!

My best friend Liz then told me that her step daughter Tanya used to be a florist so I arranged to meet up with her last week and she gave me a very reasonable quote to make my flower balls up in fresh carnations. Much as I don’t mind doing the flowers myself, it will be a lot less stressful if I don’t have to spend a whole day just before W-day sorting them out! So, despite all my DIY experiments, I think I’m going to order the flowers from a fabulous wholesaler that I found called Nursery Fresh who are uber helpful, pretty cheap and will deliver the flowers I want a couple of days before the wedding. Bonus! Then Tanya will come and work her magic on them and create lots of beautiful flower balls, 3 bouquets and a few buttonholes too. Tanya is trying to get back into floristry on a freelance basis after a baby break and is based in the Harlow/East London area but will happily travel, so if you need a good value florist to create your expensive ideas on a cheaper basis then I can definitely recommend her. You can contact her on tanyasflowerdesigns@gmail.com

So that’s it lovelies … hope you’re enjoying my wedding mania!  I’d love to know if any of you fell in love with an expensive idea you saw in a picture and attempted to recreate it on a budget?.  Also if you know anyone who could make a delicious gluten free cheesecake (x3) then please let me know, and if you have any suggestions on gluten free buffet options (especially a non-traditional idea) then please say as I’m desperate for ideas on that front!

Oh and I couldn’t leave without squeezing in a gratuitous picture of our newest addition to the family … Baxter, our 10 week old puppy. 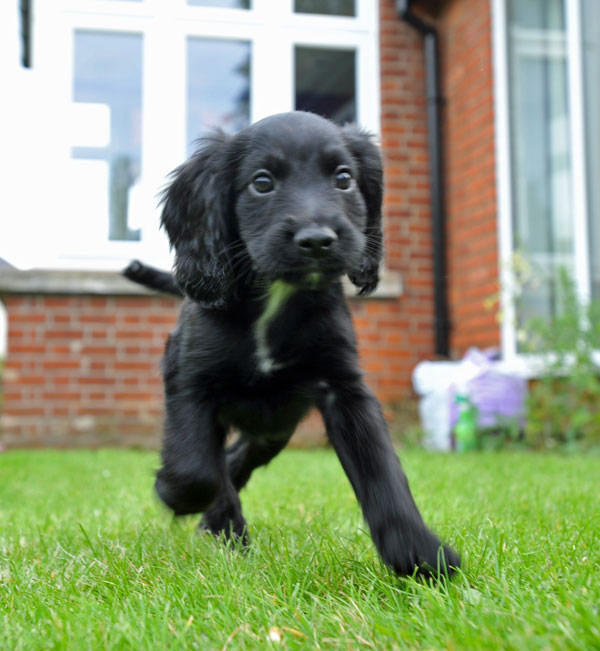 See you next month!

40 thoughts on “What Shirley Did… Food (& Flowers) For Thought.”